Kinsale was Car-azy for Cannonball

On Friday, September 8th 2017 CANNONBALL arrived to the scenic town of Kinsale in County Cork at 2.30pm where spectators got up close and personal with 190 of the finest cars on the planet and then enjoyed the unique festival atmosphere that Cannonball is renowned for. Now in its ninth year, CANNONBALL has raised almost €900,000 for Irish Charities and this year, proceeds will go to Make-a-Wish Ireland. Top mark cars included McLaren, Lamborghini, Ferrari, Aston Martin, Porsche, Masseratti, Rolls Royce and Bentley

Very Special VIP Guests of Cannonball in Kinsale in Cork last Friday were the former conjoined twins Hassan (7) and Hussein (7) Benhaffaf from Carrigtwohill. The famnous brothers – who previously met Queen Elizabeth in Cork in 2011 and are well known in Cork – had a wonderful time with all the cars and Cannonballers. 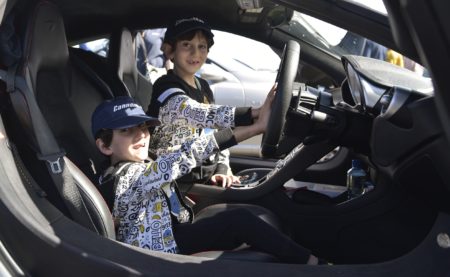 The gleaming convoy of 190 supercars and novelty cars worth an estimated €32million drove through almost 1000 kilometers of Irish open roads. 40% of Cannonball entries came from outside of Ireland and this year an exciting team with 10 supercars came in from Dubai. Each start and finish line at each host town was infused with an electric atmosphere . Proceeds from the event this year will go to Make a Wish Ireland, a children’s charity that grants magical wishes to children between the ages of 3 – 17 years with life-threatening medical conditions.

CANNONBALL is the brainchild of Kildare Businessman and AB Signs proprietor, Alan Bannon and the benefit to the Irish economy of this event is estimated at €2,567,000 per year. With 2 National Awards and 4 nominations this year, this Supercar event shows no signs of slowing down and is now gearing up for the US in October and Japan in 2019.

“We were very proud to meet Hassan and Hussein and they are truely inspirational young boys. We love to have fun and bring a big show to all of the towns and cities we visit with Cannonball but putting a smile on the faces of children and boys like Hassan and Hussein is really what Cannonball is all about” said Cannonball Founder and Kildare AB Signs Businessman Alan Bannon