2017 has been a good year for East Cork’s Garryvoe Hotel and following the recent Gold Medal Awards, which took place on Tuesday 26th September, it got better. 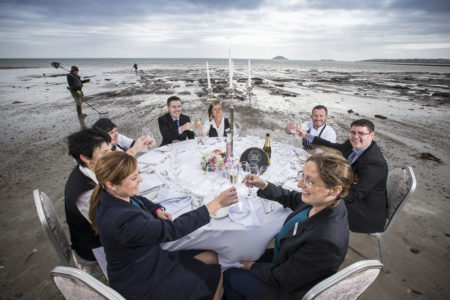 The awards ceremony was held at Kilkenny’s Lyrath Estate and was marked with a black-tie ball, attended by 600 nominees and finalists in each of the 33 categories. Among those waiting with baited breath for the announcement of the winners was Stephen Belton, Managing Director of Garryvoe Hotel, which was nominated across two categories: Ireland’s Four Star Hotel and Ireland’s Wedding Hotel. In spite of incredibly stiff competition on the night, the Garryvoe was honoured in one of the Award’s most coveted categories and was named as Ireland’s Wedding Hotel.

This win for the venue was particularly poignant, as it marks the third honour they have received this year based on their impeccable wedding service. In March of 2017, the hotel’s wedding coordinators – Andrzej Srama and Ben Sharkey – won the Weddings Online Award for Venue Coordinators of the Year, while the hotel itself was also named as the Hotel Venue of the Year Munster. In fact, 2017 became the third year in a row for the hotel to scoop the latter honour.

It is no surprise that this beachside venue has spent much of the past year gathering trophies based on their excellence in the field of wedding planning and performance. The breath-taking views that provide the backdrop for stunning photographs, the gourmet experience created by head chef Kevin O’Sullivan and his team and the sublime service offered by the hotel’s award-winning Coordinators all combine to create a magical experience that many couples search far and wide to find.

As a finalist, the Garryvoe Hotel was visited and blind site inspected by one of the carefully-chosen judges from the Gold Medal Awards judging panel; all of whom were selected based on their industry expertise across the hospitality sectors. Following this inspection, the scores of the nominees involved in each category are examined and the winners chosen.

Speaking after their most recent Gold Medal Awards win, Managing Director Stephen Belton commented: “The Gold Medal Awards were a really big deal for us and we were especially hopeful that we’d scoop the award for Ireland’s Wedding Hotel, so to be going home with that very trophy in hand means the world. We work so hard as a team to keep up the standard of service that the Garryvoe has become known for, particularly when it comes to weddings and to see that everyone’s dedication has been recognised makes all the late nights and early mornings worthwhile!”

One of the judges on this year’s panel, Sybil Mulcahy, was also quick to applaud the Garryvoe and all of the nominees and winners following the event, saying: “The calibre of entries this year was incredible and we are delighted to see such a strong offering in our hospitality industry. It bodes extremely well for the tourism sector and for our economy as a whole.”