The Cork based political technology provider Ecanvasser has announced the release of Ecanvasser Nexus – a first of its kind tool designed especially to meet the needs of large political organisations.

Ecanvasser Nexus allows national and regional organizations to obtain oversight and administrative control over multiple campaigns and view the information in one convenient and centralized dashboard. The groundbreaking platform also provides visibility into both higher level campaign data and aggregate voter information.

Using Ecanvasser Nexus, a political headquarters can gain a bird’s-eye overview of all grassroot and regional level activity taking place in a country. Alternatively a political alliance operating across a continent could aggregate all voter data from its constituent parties and administrate local campaigns.

According to Brendan Tobin, Head of Growth at Ecanvasser, “Nexus is currently being rolled out by various customers across Europe. In particular, ALDE (the third largest political alliance in the European Party) has been a strong proponent of the tool. Nexus will allow political parties to exploit the power of big data while remaining strictly compliant with privacy protection legislation. We expect Nexus to transform the way politics is managed digitally.” 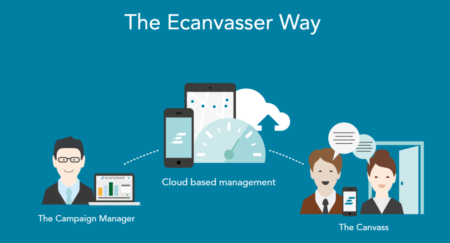 Brendan Finucane, CEO of Ecanvasser, added: “If voter data has been managed digitally at all, it has traditionally only been processed at the local level. By providing the digital infrastructure to allow for the national and supra-national administration of voter data, Nexus will unlock the ability for parties to get big picture insights that they could not have accessed before with any level of convenience. What Nexus allows parties do is unprecedented.”

About Ecanvasser
Ecanvasser, a Vconnecta product company, develops a toolkit that is at the cutting edge of political technology and enhances traditional political practice with digital infrastructure and analytics. Based and founded in Cork, Ireland, it is used by over 800 campaigns around the world.