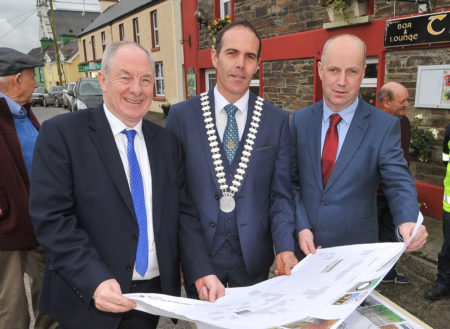 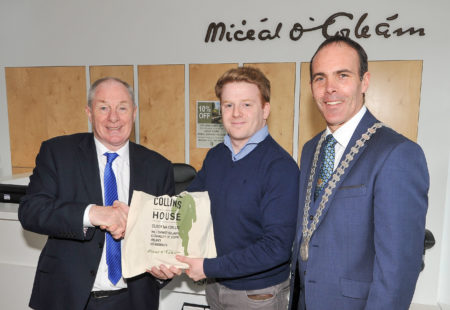 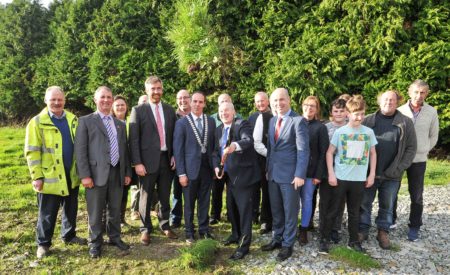 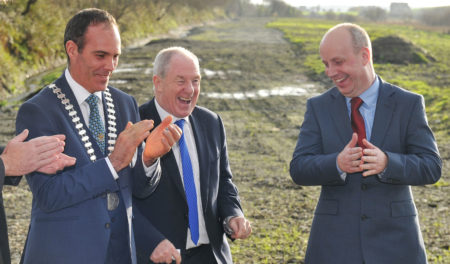 Michael Ring TD, Minister for Rural and Community Development, centre, accompanied by Cllr Declan Hurley, Mayor of the County of Cork and Jim Daly TD, minister for Mental Health and Older People, at the sod turning for the Clonakilty walkway.
Picture: David Keane.

Minister Ring said: “Today’s visit to west Cork has given me an insight into how vibrant communities working together can help improve local areas and how targeted Government investment can support them in their work.

“The Ludgate Hub, which has been allocated €150,000 by my Department through the Town and Village Renewal Scheme, is clearly one of the best digital hubs in Ireland. Digital hubs are springing up around the country, many with financial assistance from my Department, and I was not surprised to learn that many of them are visiting Ludgate for inspiration.

“We are backing digital hubs because they provide rural innovators and entrepreneurs with a window to the world. This means that these people can choose to live and work in a rural setting, often in the community they grew up in.

“The building housing Ludgate Hub started life as a cinema in the 1940s and has also served as a bakery. The funding allocated by my Department will enable it to completely upgrade its premises, making it an even more attractive place in which to do business. Over 30 business interests are operating out of the hub.

“I was delighted to lay the foundation stone for the new village plaza in Drinagh which has been allocated €80,000 under the Town and Village Renewal Scheme. This has the potential to transform this small village. I also turned the sod on the Clonakilty Cycleway and Walkway for which I recently allocated €100,000 under the Town and Village Renewal Scheme. I look forward to Minister Daly bringing me back to west Cork when these projects are up and running to get a sense of the impact they are having on the local areas.

“I was also honoured to meet the Clonakilty Tidy Towns Committee which has been one of the best performing Tidy Towns groups in the country in recent years. The Clonakilty Tidy Towns effort is a brilliant example of community partnership in action. The Committee works with the business community, the Chamber of Commerce, the GAA, and local schools and sports groups. I was delighted to meet the group again so soon after presenting them with the trophy for Ireland’s Tidiest Small Town in September. From talking to the group today it is clear that it is about more than winning trophies. It is all about working as a community to make their town the best place it can be.

“This Government is absolutely committed to delivering large and small scale projects for the people of Cork. Our investment of €30 million towards the refurbishment of Pairc Uí Chaoimh will provide a major boost to sport in the county. As announced at the recent Cabinet meeting in Cork city, the Government is committed to the development of a motorway connecting Cork and Limerick at a cost of €850 million. This will complete the Atlantic corridor and is proof that all roads don’t lead to Dublin!”

The Mayor of the County of Cork, Cllr Declan Hurley, welcomed Minister Ring to west Cork and highlighted the positive impacts of the Town and Village Renewal Scheme and the Tidy Towns. Mayor Hurley said: “Cork County Council received over €1.34 million for 15 towns across the county under the 2017 Town and Village Renewal Scheme.  This money is being used to create heritage trails, enhanced streetscapes, support economic development and support tourism initiatives which will bring more visitors to Cork.”