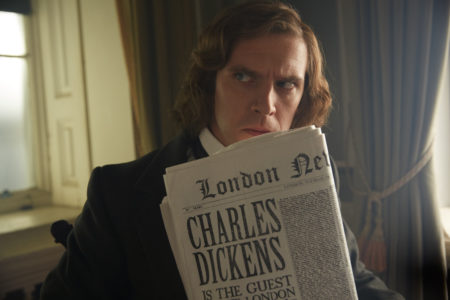 The 62nd Cork Film Festival takes place across 10 days from November 10-19. This year’s Festival will screen more than 200 films, including The Man Who Invented Christmas. For full details visit corkfilmfest.org

The 62nd Cork Film Festival opens tomorrow night, Friday with the Irish premiere of The Man Who Invented Christmas at The Everyman.

Downton Abbey’s Dan Stevens stars as Charles Dickens in Bharat Nalluri’s comedy-drama, a creative spin on how the famed novel A Christmas Carol was created.

Ireland’s first and largest film festival runs until November 19th, with 115 feature films, 34 documentaries and 116 shorts, while 50 countries are represented throughout the programme. The opening weekend will present premieres, thought-provoking documentaries, and fun family films. For full details of the programme and tickets, visit corkfilmfest.org.

The Irish premiere of American crime-drama film, Good Time, directed by celebrated filmmakers Ben and Josh Safdie, will also be screened on opening night, at 10.30pm at the Triskel Christchurch. The film stars Robert Pattinson (Twilight) who is being tipped for an Oscar® nomination for his career-defining performance.

Several Irish films feature across the opening weekend including the Irish premiere of gothic horror, The Lodgers (November 12, The Everyman). Directed by Brian O’Malley, the film was largely filmed in Wexford and stars Bill Milner (X-Men: First Class) and Eugene Simon (Game of Thrones).

Also screening on November 12 at The Gate Cinema will be Gerry Gregg’s Condemned to Remember, a documentary that follows Tomi Reichental, a Holocaust survivor living in Ireland on an epic journey to confront the past.; along with Maurice Fitzpatrick’s In the Name of Peace: John Hume in America, a documentary narrated by Liam Neeson that tells the story of how John Hume harnessed Irish America to bring peace to Northern Ireland.

Other programme highlights include renowned documentarian Alex Gibney’s No Stone Unturned, which examines the Loughinisland massacre in County Down on June 18, 1994; and Sean Baker’s The Florida Project, a deeply moving and unforgettably poignant look at childhood. Both will be screened on November 11 at The Everyman.

One of the biggest family-friendly films of the year, Paddington 2, will be screened this Saturday (November 11) at The Gate Cinema at 11.30am. This screening will be preceded by a Paddington family treasure hunt starting at 10am at The Gate Cinema. Prizes will be given for best wellingtons, bear and hat.

Speaking ahead of the Festival’s opening night, Festival Producer Fiona Clark said: “This year’s Festival opens with a wonderfully varied programme of world class films that we know will excite, engage and entertain audiences of all ages and interests. With 48 films over the opening weekend alone, the Festival is a not-to-be-missed destination of discovery for audiences to explore and enjoy.”