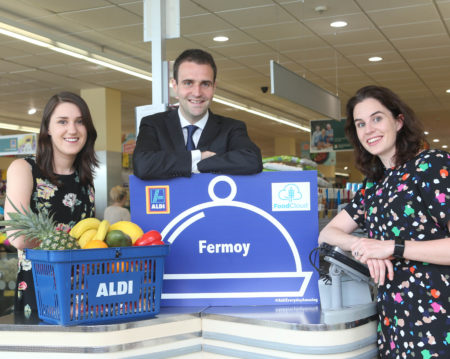 Aldi’s Fermoy store is the latest Aldi store to participate in the FoodCloud programme. Aldi has significantly scaled up its operations with FoodCloud, with 128 Aldi stores now donating surplus food, increasing Aldi’s overall donations to Foodcloud by 60%.

This week Aldi reached the significant milestone of donating 1,000,000 meals to charities through FoodCloud since the partnership began in 2014. This equates to a saving of almost €1.5 million for the charity partners involved.

Commenting, Finbar McCarthy, Aldi’s Group Buying Director said, “We are delighted to announce that we are now working with FoodCloud to support local charities in Fermoy. Groups such as Fermoy Meals on Wheels, Fermoy Family Resource Centre and St Vincent De Paul Fermoy play such an important role in their community and we are very proud to be able to support them and the vital work they do.”

“We are always looking at ways to innovate on behalf of customers. Our research tells us that 87% of people prefer to shop with a retailer that redistributes its unsold food to those in need. We also know that many of our customers want options to help reduce their own household waste, and we’re responding to meet those needs. We have already introduced smaller pack sizes and made perishables, like bananas, apples, oranges and avocados available for individual sale. Also, instead of stocking multi-buy offers which inevitably lead to waste, we focus on providing what our customers really want – everyday amazing prices on fresh and quality produce throughout our stores.”

Commenting, FoodCloud co-founder and CEO Iseult Ward said, “Our partnership with Aldi has already enabled us to redistribute 510 tonnes of consumable food to hundreds of charities nationwide. We are excited that more Aldi stores are now part of the FoodCloud mission to help tackle food waste and food poverty. While consumer awareness of the issue is growing, consumer behaviour still needs to change. In Ireland alone we generate over one million tonnes of food waste annually while one in eight people are experiencing food poverty.”

“The expansion of our partnership with Aldi means that FoodCloud can continue to scale in size to help combat the issue at a local, national and, increasingly, international level. We look forward to working with the new Aldi stores coming on board. Their donations will help to sustain local charities and communities throughout the country.”

Charity groups and community groups can register for the service at http://food.cloud/