Bus Éireann marked its 30th birthday in Cork on December 1st as new reduced Leap Card fares launched across the city and suburbs.

Celebrations kicked off in Parnell Place bus station today with a Radio outside broadcast, and distribution of free Leap Cards loaded with single city trip credit, along with other goodies. There were competitions for hotel getaways as well as Leap Cards with €30 credit, to mark the occasion.
Bus Éireann staff and brand ambassadors were on the ground to meet with the public, and passengers, in a busy and festive Parnell Place. 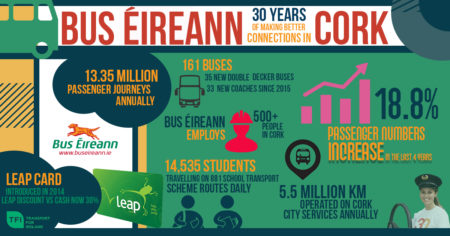 Today marks the amalgamation of the Red ‘Leap’ city zone of Cork city with the Green ‘outer’ zone – encompassing areas such as Carrigaline, Ballincollig, Little Island and Cork Airport – bringing significant savings for Leap Card customers. A passenger travelling in from Carriagline into Cork city would have previously paid €3.52 Leap or €4.40 cash for a single trip. With the migration to the city fare zone this passenger will pay €1.89 leap or €2.70 cash, which represents a saving of 46%.­ Shorter single city trips will cost €1.61 on Leap compared to €2.30 cash.

Following on from the successful additional 700,000 passengers journeys in 2016 on the Bus Éireann city network – marking an increase of 18.8% between 2013 and 2016, from 10.6m to 12.6m journeys – strong growth continues in 2017. The NTA’s recently announced fare determination will provide for savings of up to 30% on single city trips – reducing a city cash journey from €2.30 to €1.61. Other areas, which were previously Green Zone and now benefit from the extension of the Red Zone include Ringaskiddy, Rochestown, Crosshaven, Blarney, Glounthaune and Carrigtwohill.

Sixteen new double deck buses and nine new coaches were introduced into the Cork fleet during 2017, to cater for this growing passenger demand. These high capacity state-of-the-art vehicles feature double USB-sockets, WiFi, high back cushioned seats and real time passenger information screens. It is expected that more such vehicles will enter the fleet in 2018, with NTA funding, to cater for growing passenger numbers and network enhancements in Cork.

Bus Éireann continue to work with the NTA in relation to ongoing network development, and some announcements on this front are expected early next year. Both organisations are committed to improving public transport, but there is a requirement for better bus priority infrastructure.
This includes more bus lanes and bus priority at traffic junctions, and both Bus Éireann and the NTA continue to work with Cork City Council to expedite this where possible.

“It’s great to celebrate 30 years of ‘making better connections’ with strong passenger growth and new fleet.
As the economy returns to growth, traffic congestion is having a real impact, and public transport is a way to counter that.

“Recently announced zonal changes for Leap customers will see significant savings as well as better connectivity. These changes, along with the recent fleet investment in Cork, will ensure best value fares and more comfortable journeys for customers.”

NTA Chief Executive Officer Anne Graham said: “Today is a good-news day for members of the travelling public in Cork. Thanks to initiatives like the expansion of city bus zones in Cork and other regional cities, passengers on about five million journeys on Bus Éireann services will be paying lower fares from today.

“With fare reductions and investment in state-of-the-art fleet, NTA is happy to work with Bus Éireann and our transport partners in making sustainable transport a more attractive option for more and more people.