COBH, IRELAND: Historic ‘Heartbreak Pier’ where final Titanic Passengers boarded from is to be revamped

By TheCork.ie on 4th January, 2018Comments Off on COBH, IRELAND: Historic ‘Heartbreak Pier’ where final Titanic Passengers boarded from is to be revamped

​​Significant Project to Save ‘Heartbreak Pier’ Gets Underway in Cobh

Possibly one of the most historic piers in Ireland is set for significant investment and an ambitious re-development plan to protect and conserve, whilst also becoming a leading and poignant tourist destination for Ireland’s Ancient East.

Known locally as Heartbreak Pier, the aged pier structure at the rear of the White Star Line building in Cobh saw an estimated 1 million people leave Ireland for the United States and Australia. Over the last number of decades, the pier fell into disrepair and was victim to erosion, storm damage and weathering.

“The pier at Cobh as a structure was sure to be lost to the sea, and with it a significant piece of history. Having transformed the White Star Line building, and seen firsthand the impact of the site on visitors as well as the region, we felt passionately about saving ‘Heartbreak Pier’ and ensuring that it would not be lost to the elements,” said Gillen Joyce, proprietor and manager of the Titanic Experience and partner in a joint project with Cork County Council and Port of Cork to save this historic pier. 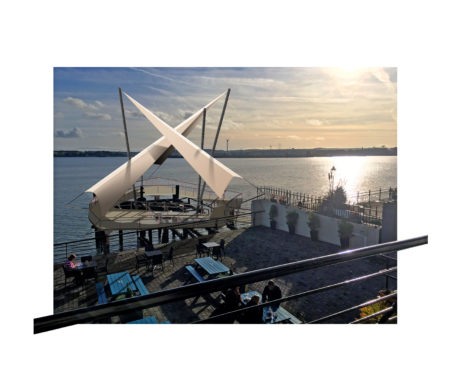 Following works to stabilize the pier structure in January 2016, a new and ambitious phase of investment is now underway at Heartbreak Pier to restore it so that visitors, for the first time in many decades, may truly connect with the past, by setting foot on the planks of this poignant pier where so many boarded tenders to leave Ireland never to return again.

The redevelopment plan for the pier is indeed an ambitious one, which sees the creation of a new contemporary walkway structure, with impressive sail detail aiming to deliver an iconic and contrasting landmark within the historic maritime town of Cobh. Key to the design of the pier walkway is a new structure which interacts with the old pier, and is designed to retain as much visibility as possible. Visitors will have a full view and will be able to, once again step on an original plank, the same last point of land contact for emigrating passengers.

By providing a backdrop to the main promenade, the pier is intended to enhance the town’s existing attractions, providing a tangible landmark to continue visitors explorations of popular themes in the town, including emigration, the Titanic and general maritime history.

It’s etimated that the pier is over 150 years old and that over 1 million emigrants walked its boards en route to a new life in North America, the UK and beyond, including Titanic’s 123 Queenstown passengers. As many emigrants did not have the means to return home to visit once they made that decision to leave Ireland, the Pier was known locally as Heartbreak Pier, representing the heartache of a final goodbye to family and home.

There have been many calls made over the years to invest and save the pier from inevitable collapse, but ownership of the pier was somewhat of a mystery and challenging to the cause. After 3 years of research, Titanic Experience Cobh Ltd. purchased the pier outright in 2015. On taking ownership of the pier, the first steps involved securing the existing structure, which at the time was at serious risk of being swept away in heavy storms. Using hidden angle pinning, the structure was carefully stabilised without visually impacting the integrity of the pier. A number of pieces that had fallen off were reattached also as part of the work to preserve the pier. These works were carried out in December 2015 and January 2016, in conjunction with Cork County Council and Port of Cork.

“An application to Failte Ireland’s G​r​ant Scheme for Large Tourism Projects really gave this project momentum. We believe Heartbreak Pier to be a valuable asset to Ireland’s Ancient East and are delighted with our successful transition to phase two of our Titanic Connections project. The feedback and support from Failte Ireland has been fundamental in getting the project to the next phase,” said Gillen Joyce.
Under the plans, access to Heartbreak Pier will be from a gated entryway in the Promenade. With interpretive information stations, visitors can expect an emotive journey to experience first hand the sights, sounds and stories of 19th & 20th century emigration from Ireland.

The works are expected to be completed by March 2019.​

COBH, IRELAND: Historic ‘Heartbreak Pier’ where final Titanic Passengers boarded from is to be revamped added by TheCork.ie on 4th January, 2018
View all posts by TheCork.ie →