One of the biggest airlines in the world, Air France is to begin services out of Cork Airport from May, with a new Cork to Paris-Charles de Gaulle route. 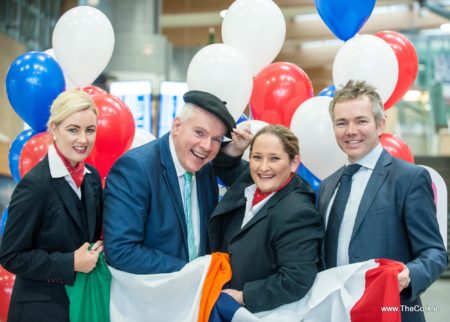 The daily flight during this year’s summer season will not only link Cork to France, but also connect passengers from the south of Ireland to Air France’s extensive network of over 180 destinations worldwide via the international hub of Paris-Charles de Gaulle.

The new service will bring an additional 33,750 available seats, commencing 26th May 2018 and running through until the 27th October 2018.

Benedicte Duval, General Manager of Air France-KLM UK & Ireland stated: “Demand for efficient, seamless and convenient travel from the south of Ireland continues to grow and we are delighted to be in a position to offer both business and leisure passengers in the region even greater choice and connectivity. The new service not only links Cork to the French capital and the rest of Europe, but it provides passengers with the opportunity to connect to our extensive network of over 180 exciting worldwide destinations.

“We look forward to welcoming new and returning passengers on board Air France in the coming months.”

Welcoming the new route, Niall MacCarthy, Managing Director at Cork Airport said: “This is great news, not only for those seeking to travel to France, but also for those wishing to venture further afield. By flying out of Cork Airport with Air France, travellers will have easy access to many long-haul destinations from Paris-Charles de Gaulle, such as Brazil, Mauritius, Mexico and Algeria as well as easy short haul connections to Nice, Brussels, Rome and Lisbon.”

“The new Air France Paris route serves this aim. Ireland is ranked as the fourth most popular destination with the French and the new service from Cork will further grow inbound tourism from this key continental market to counties across the south of Ireland,” he said.

Speaking on today’s announcement, Niall Gibbons, CEO of Tourism Ireland, said: “This is more good news for tourism to Cork and the south of Ireland as we prepare for 2018. It will certainly expand travel options for French holidaymakers wishing to visit this part of Ireland. We already work very closely with Air France and we look forward to co-operating with them to maximise the promotion of this new service from Paris. As an island, the importance of convenient, direct, non-stop flights cannot be overstated – they are absolutely critical to achieving growth in inbound tourism.”

All flights will be operated by Air France Hop! using Embraer 170 aircraft, carrying up to 76 passengers. Fares start from €129 return in economy including all taxes.

To book flights, visit www.airfrance.ie or call the Air France call centre on 01 6590442. For more information on Cork Airport seewww.corkairport.com