The Oyster Tavern had a solid first few months in business and has now kicked off 2018 with a bang by scooping the ‘Best Cork Vintners Federation of Ireland Pub’ award. 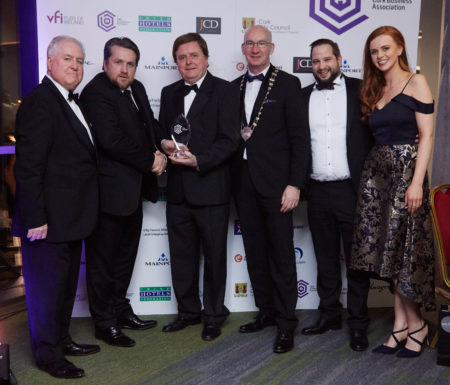 The two-storey city centre venue beat off extremely tough competition on the Cork social scene to be crowned winners at the Cork Business of the Year Awards which took place on Saturday night in Pairc Uí Chaoimh. The awards recognise the outstanding contribution of businesses and individuals working across varied sectors of business in Cork.

The renowned 18th century bar last year underwent a €1.5million transformation and is now the place to be seen in Cork City, attracting visitors from all over the country. The significant investment came from new owner and well-known publican and restaurateur Alan Clancy, who also owns House in Dublin, 37 Dawson Street, The Oak, House in Limerick, the renowned Amber Club, and House in Belfast which opened last week. Alan also already has big plans underway to open more high calibre venues in 2018.

Speaking about their win, Jerry Harrington from The Oyster Tavern said “We are so thrilled to win this award, we have worked hard to bring something new and different to Cork and are delighted that this has been recognised with this award. We worked hard to get the right mix between our food offering, our late nights, and our atmosphere, and it’s great to see that it’s working. We are totally humbled to accept the title and could not be happier. It’s a great start to 2018.”

The Oyster Tavern was officially opened in August 2017 and welcomed a sea of famous faces at the launch event including Peter O’Mahony, Pippa O’Connor Ormond, Brian Ormond and Brian Dowling.

The official launch marked a very significant day for Cork City as The Oyster Tavern is part of the €50m redevelopment of The Capitol which has brought a breath of fresh air and energy to Cork’s city centre.