By TheCork.ie on 17th June, 2018Comments Off on Castletownbere RNLI lifeboat assists yacht which had been attempting transatlantic journey

Castletownbere RNLI lifeboat ‘Annette Hutton’ was put on standby yesterday evening when a yacht 85 miles south west of Bere Island requested assistance from Valentia Coastguard Radio. The vessel, a 15-metre yacht ‘Mae West’ with one person onboard had left the Netherlands and was commencing its transatlantic voyage when it experienced difficulty with its propellor. In storm-force conditions, the sailor decided to turn back and head for Castletown under sail. 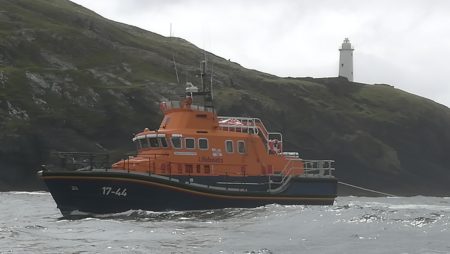 The Castletownbere lifeboat was launched at 10.15 this morning and located the stricken vessel, in Force 5 winds with a one-metre swell, five miles south-west of Ardnakinna lighthouse at 10.35. The boat was successfully taken under tow and berthed at Castletownbere pier at 12.20 this afternoon. The sailor expressed his sincere thanks to the crew for assistance.

Castletownbere RNLI lifeboat assists yacht which had been attempting transatlantic journey added by TheCork.ie on 17th June, 2018
View all posts by TheCork.ie →