The outgoing Mayor of the County of Cork, Cllr Declan Hurley met for the second time during his term with Minister Shane Ross to continue the discussion on much needed investment in Cork Roads. 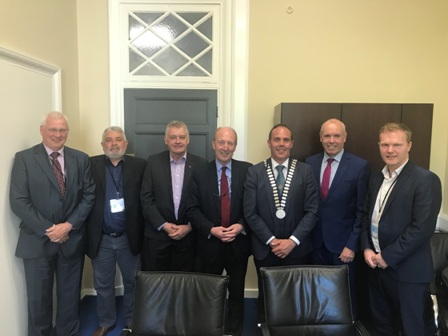 Top of the agenda was the requirement of transport infrastructure investment for Cork in order to fully realise the potential set in Cork 2050, a joint strategy with Cork City Council which predicts that, with the right infrastructure in place, Cork is capable of creating up to 120,000 new jobs by the year 2050.

Funding requirements for regional and local roads were also discussed. Cork County Council oversees the maintenance of the country’s largest road network, over 12,500 kilometres and has seen funding from the Department fall dramatically in recent years, from €65 million in 2008 to €36 million in 2017.

Mayor Hurley spoke of the importance of adequate infrastructural investment with Minister Ross, “While I welcome the opportunity Minister Ross and acknowledge the 22% increase in funding secured after our meeting last year, I have again reiterated the importance for a return to the monies spent on roads in 2008. I also pressed the importance of upgrading the R586 between the key towns of Bandon and Bantry to national route status. This is a gateway for tourism and business in West Cork and is vital to facilitating growth in these areas.”

Chief Executive of Cork County Council Tim Lucey who was also in attendance, highlighted the importance of investment in routes such as the N25 Cork to Waterford and N28 Cork to Ringaskiddy, as key drivers of employment and growth, “Cork County Council has made a very strong case to Minister Ross on the necessity of increases in infrastructural investment for Cork. Such investment is crucial to enable the development of Cork as a region and to capitalise on the potential of Cork both in terms of new road projects and accelerating resurfacing works on all classes of roads across the county.”