Ireland had huge success at the World Rowing Under 23 Championships in Poznan today (Saturday) claiming two medals – gold and silver – to close the day in third place on the medals board with two more crews qualifying for A finals tomorrow. 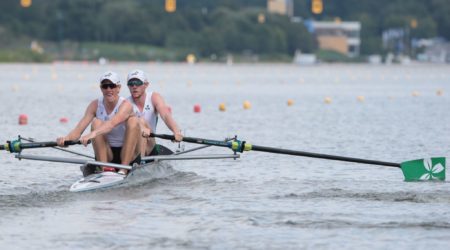 The Irish crew of Shane Mulvaney and David O’Malley, both UCD athletes, took gold in the lightweight men’s pair following a blistering race that saw them complete the 2,000m course in a time of 06:54.480, two seconds ahead of Greece who took silver. The Irish pair who won bronze in the same category last year, rowed an impressively solid, well-paced race that saw them stroke up the field incrementally from fourth place at 500m to take the lead at 1,500m and win gold and glory. Greece took silver and Italy, bronze.

Shortly afterwards, the Irish lightweight men’s quad won silver in a hotly contested race with Italy, who took the lead at the halfway mark to win, and USA, who the Irish battled the into third place. The Irish boat of UCD’s Andrew Goff (stroke), Ryan Ballantine (ERBC/ Newcastle), Niall Beggan (Commercial) and Miles Taylor (QUBBC) (bow), had won bronze in the same event last year with Goff and Beggan on board. This year’s crew will be thrilled to have fulfilled their game plan of going one better to win silver, after coming through the repechage following the heats to secure their place in the A Final.

Two further Irish boats secured their places in A finals tomorrow and have the potential to medal following the success of their semi-finals today.

Twin brothers Jake and Fintan McCarthy, from Skibbereen, came second in their SF of the lightweight men’s double sculls, crossing the line just one second behind Spain. Coached by Skibbereen’s Dominic Casey, the brothers will be happy with today’s result and the potential to medal after placing 8th in the same category last year.

UCC’s Ronan Byrne also secured his place in tomorrow’s A final of the men’s single sculls after coming second in today’s SF event. He will line up in a field against USA’s Benjamin Davison, who won Byrne’s semi-final today, and Marc Weber of Germany, who Byrne beat into third place. They will race against Canada’s Trevor Jones, who set the fastest time in the semi-finals, Brazil’s Luca Ferreira and Bulgaria’s Boris Yotov, but the 20-year-old UCC Quercus’s scholarship athlete looks well positioned to medal for Ireland.

Ireland’s Lydia Heaphy (Skibbereen) and Margaret Cremen (Lee RC) will be disappointed not to have secured a place in the A final of the lightweight women’s double sculls tomorrow which would give them a chance of a medal. The duo made a strong push at the start of their semi-final today to lead for the first quarter of the race ahead of Greece. However their early energy expenditure was unsustainable and the Irish women tailed back to place 5th, qualifying for the B Final which will give them a top 12 place overall.

Earlier in the day, UCC’s Hugh Sutton took second place in the D Final of the lightweight men’s single sculls, while Tara Hanlon (Cork Boat Club / UCC) and Emily Hegarty (UCC) came sixth in the B Final of the women’s pairs.