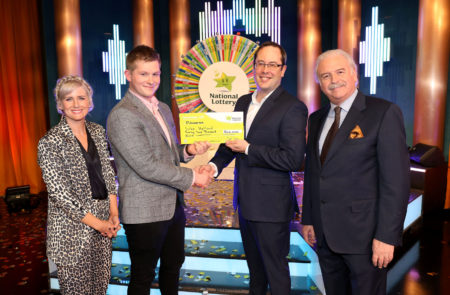 A geologist from Co. Cork has got his New Year off to a great start by unearthing a €42,000 fortune on the National Lottery Winning Streak game show last Saturday (5th January 2019)!

Luke Holland, (24) from Bandon, was in a pub in Cork city catching up with friends last month when a call came through to say his name had been selected to appear on Winning Streak. Luke wasn’t buying this initially, but his phone lit up for about half an hour after so he finally believed the good news.

Luke, who graduated with a degree in geology from UCD in 2017, lives in Mullingar, Co. Westmeath, where he works in mineral exploration for Group Eleven Resources. There has been great excitement in Bandon at Luke’s Winning Streak appearance all over the Christmas period with family and friends planning their Dublin to cheer him on. They included his mum and dad Collette and Sean, his two brothers Simon and Adam and girlfriend Patricia and many more.

Luke is a massive rugby fan and used to play for his local side, Bandon RFC. He gave up playing when he moved to Westmeath for work. He is an avid supporter of Munster rugby

The National Lottery game show, co-presented by Marty Whelan and Sinead Kennedy, features some perennial favorite games as well but also brand new games including Play or Pay, Roll for Riches, WinFall and Electric Dream – where one player will win an electric car worth €25,000.