‘Dáil 100’ Exhibition launched in Cork as part of Dáil100 celebrations 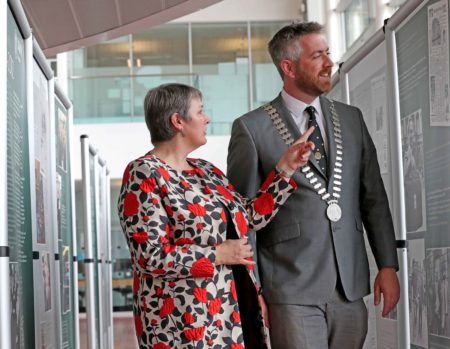 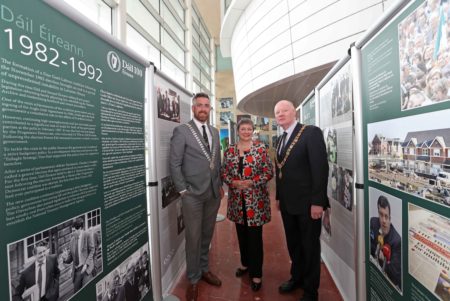 The role of the first members of Dáil Éireann from Cork was highlighted Friday as ‘Dáil 100’ was launched regionally for the first time, on Leeside.

The launch of the exhibition at Cork County Council Offices, is part of a programme of events designed to commemorate the first public sitting of Dáil Éireann in 1919.

The arrival of the regional exhibition is part of celebrations to mark 100 years of Irish Parliamentary democracy and educate the general public about the role and importance of the Irish Parliament.

By bringing this exhibition to Cork, the Houses of the Oireachtas is following on from fully-subscribed open days enjoyed by, young and old, in Leinster House in January.

The exhibition Dail 100 was jointly launched on Leeside by the Mayor of the County of Cork Cllr Christopher O’Sullivan and Deputy Marcella Corcoran Kennedy TD.

As part of the Political Steering Group which oversaw Dáil 100 celebrations, deputy Corcoran Kennedy believes the principles which underpinned our first Dáil remain as relevant as ever. Deputy Corcoran Kennedy said: “As we celebrate its 100 anniversary we know that Dáil Éireann never lost sight of its guiding principles; rather it has continually adapted to keep abreast of the many new challenges it has faced throughout the following ten decades.”

The Mayor of the County of Cork Cllr. O’Sullivan said: “The Dáil 100’ exhibition is a great resource which the people of Cork, and tourists, will have on their doorstep for the next six weeks, and I encourage as many people as possible to see this exhibition in the flesh. Thousands have already attended the exhibition in the Houses of the Oireachtas, and we expect significant local interest.”

The exhibition at County Cork Offices charts 100 years of Parliamentary Democracy in Ireland from the first public meeting of Dáil Éireann on January 21st, 1919. Iconic images have been selected to chart important moments in Irish society and explain how they shaped the State today.

The exhibition is open to the public during the months of June and July between 9am-5pm Monday to Friday, and will outline the many ways in which the work of Dáil Éireann has changed and developed in many ways since those early days.

Dáil Éireann held its first public meeting in the Round Room of Dublin’s Mansion House on the 21 January 1919. It was a brave and defiant move coming six weeks after the December 1918 general election where 69 of the 101 successful candidates were pro-independence.

All elected members were invited to attend that first meeting but given the complicated political landscape of the time not all could or would attend. On the day, 27 members were present in the Mansion House. They declared Irish independence, sought international recognition for Ireland’s freedom, and set about the process of building a State.

In January, Dáil Éireann celebrated the 100th anniversary of its first public sitting in Dublin’s Mansion House in 1919, by organising a special sitting in the Mansion House, now, Cork will now host Dáil 100’. On the same day Cork County Council held a special Full Council meeting to commemorate this historic event. This meeting was conducted through the medium of Irish in honour of the chosen language for the proceedings at the first Dáil meeting in Mansion House a century earlier. Simultaneous translation was provided which afforded all Members the opportunity to participate, and a speech was given by Keynote Speaker Dr Neil Buttimer, which was enjoyed by elected members, the public and the media alike.