The Lord Mayor of Cork, Cllr John Sheehan was pleased yesterday to host a distinguished delegation from the California State Legislative Irish Caucus at a reception in his chambers at Cork City Hall. 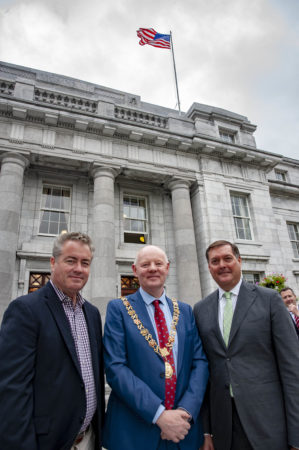 The Lord Mayor of Cork, Cllr. John Sheehan, pictured with co-chairmen of the US delegation, Pat O’Donnell (left) and Bill Brough.
The Irish caucus from the Californian
Pic: Brian Lougheed 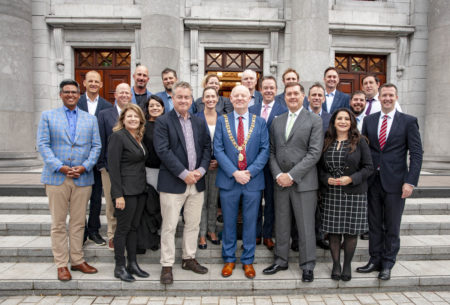 The group was comprised of a mix of Republicans and Democrats representing communities right across the state of California, and included five State Assembly Committee Chairpersons, one Senate Committee Chair and several Vice Chairs, as well as senior representatives from the Californian business community.

Lord Mayor of Cork, Cllr. John Sheehan said: “I was honoured to welcome the California State Legislative Irish Caucus at City Hall on their Irish visit. It was a great opportunity to engage with them on issues such as Brexit, climate change and also the common links between Cork and California such as our shared history and more recently our IT and Pharma links.”

Their visit was undertaken to further develop California’s trade links with Ireland. California is already one of Ireland’s most important trading partners in the United States. Cork has a special connection with the Golden State, as the city has enjoyed a twinning relationship with San Francisco since 1984 and Californian companies are among some the biggest employers in Cork City.