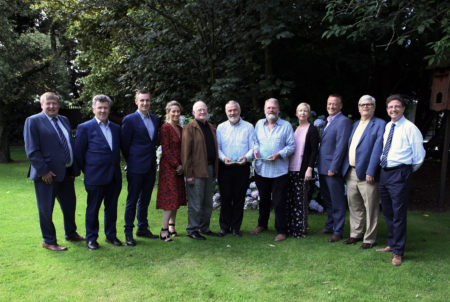 Cork Folk Festival Co-Directors William Hammond and Jim Walsh have been honoured as Cork Persons’ of the Month for August 2019. Between them, the duo have been organising the festival on a voluntary basis for over 40 years.

The Cork Folk Festival is an annual event that brings a host of traditional and folk events to more than forty venues across Cork city and county. The festival seeks to celebrate and showcase the indigenous music, song, dance and folklore of Cork, embracing the rich cultural heritage of the Muskerry Gaeltacht and Sliabh Luachra. For a few days each year, the festival transforms the city and county into a hub for folk and traditional music.

Having volunteered for the festival since its inception in 1979, Jim Walsh, former head of CIT’s Department of Applied Social Studies, said “The Cork Folk Festival is one of the highlights of my social calendar, showcasing only the best of Irish and international talent. Being recognised by the Cork Person of the Year awards scheme is a clear indication of what our hard work and dedication to the festival means to the people of Cork.”

Speaking about the duo’s commitment to the festival, awards organiser Manus O’Callaghan said “Thanks to the tireless work of Jim Walsh and William Hammond, The Cork Folk Festival has become an integral part of our county’s culture. Their dedication to the festival truly embodies the Corkonian spirit, and allows Cork to compete with other folk festivals and events at an international level.

Jim Walsh and William Hammond will go forward for the selection of the Cork Person of the Year 2019.