Hot off the trail of Rising Sons Brewery being awarded further accolades bestowed at the World Beer Awards in August 2019, this home grown and truly Cork business is at it again with another win as Cork Regional Winner as Best Innovative Pub of the Year as part of the National Irish Pub Awards in association with Vintners Federation of Ireland and Licenced Vintners Association.

The Best Innovative Pub of the Year sponsored by Bank of Ireland rewards a pub who demonstrates how innovation has significantly improved their business, and Rising Sons Brewery show all the signs of pure innovation, Cork-style! Listening to their customers, this brewing team have delivered a plethora of award-winning ales, stout and lager with consistent new flavours and recipes constantly being at the fore front of their ethos. 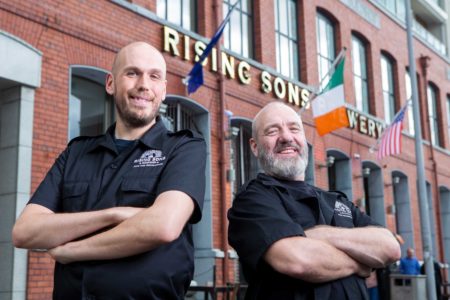 In its five years of life, Rising Sons Brewery, has far exceeded its team’s expectations. General manager Judy Wilkins said “to be nominated and then to
win the Regional of this prestigious Award, we’re yet again humbled by the acknowledgement by these large bodies and of course the true acknowledgement by way of the ever-growing customer base for our products both in our Rising Sons Brewery Pub and our sister bars . The brewing team are under severe pressure to fulfil an ever growing demand, and we are seeking innovative ways to meet this demand.” Through various local partnerships and creative ideas, success seems to be the only way forward for this local business. 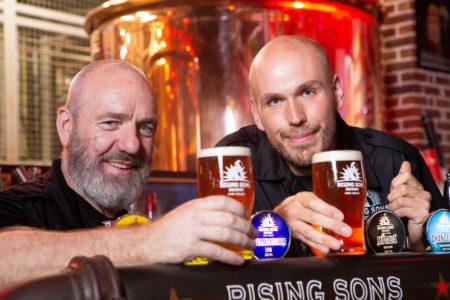 Head Brewer Shane Murphy says: “Rising Sons is family owned, quality focused, traditional but imaginative, and a mix of the old and new. We won’t stop creating and bringing our unique flavours and offerings to the local community and further afield. These recent wins are just constant reminders that we’re doing something right but more importantly it’s our customers who are consistently supporting us and have us brewers working harder than ever before.”

Conveniently located on the busy thoroughfare of the Coal Quay in Cork City, Rising Sons Brewery radiates a rock and roll, no-frills sentiment. At street level, amidst the aromas of hops and malts, a certain ambience lures you in, on passing the pubs doors.

Proud and knowledgeable staff are ready and willing to talk all things beer with you, whether you’re a hardcore beer aficionado or a newcomer to the beer scene. Their ultimate goal is to find a beer that suits you and they offer tasters of their own brews, whether the usual favourites or their ever-popular seasonal brews, with this in mind.

With plans afoot and planning permission granted for an additional brewery across the road excitement is growing for the expansion of this truly Cork, and yet humble, brewery. This further growth is indicative of the success of this craft brewery who remain loyal to its roots and its local ethos. In order to assuage the demand, Rising Sons has confirmed that discussions are moving forward with third parties, who share the Brewery’s local ambitions and pride, to aid in meeting the demand for their beers. Speaking about these partnerships, owner Benny McCabe said “We’re in a really unique position as our five-year business plan that we came to the table with on day one has thrived exponentially and so we’re in discussions with 3rd parties who have the capacities to aid us in meeting the demands of some of our beers, while we plan future expansion. We believe in doing this, not only will it allow our brewery to grow, but It’s exciting to share our knowledge with these new partners and we look forward to unveiling the partnerships in the near future. And of course, our brewing team Shane Murphy and Kieran Foley will continue to take the lead in being as innovative and creative as they always have been with regard to these recipes – after all these recipes are born of love and passion in our brew house.”

Rising Sons Brewery is set to continue to grow in its home town of Cork, all the while ensuring Cork is once again on the international map for world winners. These Rising Sons are surely the Rising Stars of the People’s Republic.