I won’t beat about the bush, I love Clonakilty Black Pudding (and the White version also) so how does the new Vegetarian version fare?

Unbiased review (we have not received this product for free)

Have you ever wanted a Coke, but bought a Pepsi by mistake? it’s not the end of the world. The product you will soon be enjoying is adequate, and indeed for others it may be their first choice, but for you it’s simply not what you expected. This is our review of Clonakilty Veggie Pudding.

I won’t beat about the bush, I love Clonakilty Black Pudding, and the White version also.

If you are reading this outside of Ireland and the UK you may well be asking yourself at this stage: What is Pudding? Well, it’s a type of blood sausage generally made from beef blood (Black pudding) or pork blood (White pudding). Other ingredients are beef suet or pork fat, and a cereal which is usually oatmeal, oat groats or barley groats. The high proportion of cereal, along with the use of certain herbs such as pennyroyal, serves to distinguish black pudding from blood sausages eaten in other parts of the world. 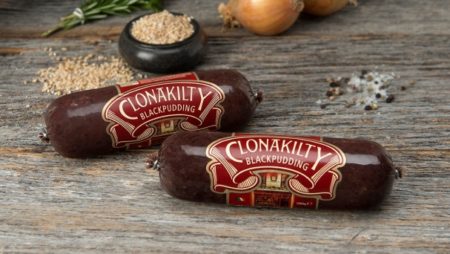 First made in the 1880’s with a secret recipe that remains the same to this day, combining beef, oatmeal, onions, beef blood and a secret blend of spices. It is this special blend of ingredients that gives Clonakilty its unique taste, crumbly texture and distinctive flavour.

What is Veggie Pudding?

Being a super fan of the traditional Clonakilty recipe it was with some delight that I learned that the company were launching a new variety. It’s called Clonakilty Veggie Pudding. It is a Vegetarian version of White Pudding. So already it’s on the back foot. Although, these days thanks to the magic of Quorn ™ there are many Vegeratian versions of meat products, which are almost indistinguishable from their meat counterparts.

So, it was with great excitement that I headed to the supermarket in search of Clonakilty Veggie Pudding. Yes! it was there, without fanfare it was located next to the traditional meat based White Pudding. The product ticks many boxes: Vegetarian-Friendly, Gluten Free, Irish Made, and has beautiful packaging. The product is by necessity wrapped in plastic, but has an outer cardboard box. Dry cardboard is recyclable and feels more sustainable (it goes into your paper recycling bin), so this box is quite literally another, em, box ticker.

The packaging contains a note that the product is raw and must be cooked befre consumption. This is different from the traditional varieties which can be eaten raw (although does anyone do that!)

As the juices began flowing under the grill the kitchen was filled with a distinctive spice aroma, which reminds one of Christmas. The plate was prepared, the knife and fork were in readiness. A single piece of white sliced pan was fresh out of the toaster ready to act as a platform for the marvellous new product.

According to the ingredients list the product is made up of:
Gluten Free Oatmeal, Onions (35%), Water, Black Beans (8%), Carrots (6%), Pea Starch, Salt, Natural Spices. (Suitable for Vegetarians, Vegans and Coeliacs)

Ingredients of Clonakilty White Pudding (the traditional product – for comparison)

I see it as being bland, but others may not. Taste is subjective. The company says Clonakilty Veggie Pudding is “Made with the same passion for taste and quality as our famous Clonakilty Black and White pudding”. Like all products the formula may change over time. Perhaps this product may not be a hit, but it fills in an important gap in the marketplace, and will appeal to many.

Our verdict is that Clonakilty Veggie Pudding is a product which has some room for improvement. It has a similar mouthfeel to the traditional version, but the taste and smell differs. It is a sign of our times that a product which originated in a Butchers’s shop (an altar to meat-eating) now has a vegetarian equivalent. Taste is subjective. I encourage you to try this product for yourself. I think you might like it.

It is wonderful that this product exists. To learn more checkout the Clonakilty Food Company website https://www.clonakiltyblackpudding.ie/clonakilty-veggie-pudding