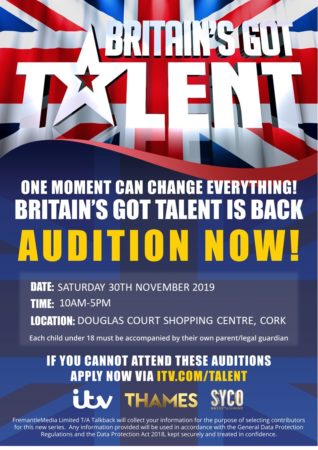 The nation’s favourite talent show is hitting the road once again on its search to find talented acts for a brand-new series of BAFTA award winning, Britain’s Got Talent.

This year, the BGT team is coming to Cork, so if you think you’ve got a talent which can impress and entertain, now is the time to show us what you’ve got.

Auditions will be taking place on Saturday 30th November 2019 at Douglas Court Shopping Centre between 10am – 5pm. All potential hopefuls need to do is come down on the day and audition!

Successful acts will then be in with a chance of securing a place at one of the judges’ auditions in 2020.

The show is open to any performer of any age, with any talent – all you need is a skill and star quality which you think will impress. Anything goes from magicians to comedians, drag acts to singers and acrobats to animal stars.

For more information on how to apply please visit ITV.com/talent.

Executive producer Charlie Irwin said: “Britain’s Got Talent 2019 was another fantastic series showcasing the best talent and variety from all over the UK. Colin Thackery triumphed, becoming the oldest ever winner of BGT proving the point – whatever age you are, or what talent you have – anything is possible. Whether you’re an acrobat, comedian, a dancer or even a puppet – we can’t wait to see what talent the public will bring in 2020. Anyone can apply – there is no age limit and we are looking for all kinds of talents. So, if you feel you have something special to show us, no matter what it is, then make sure you apply, you never know where it might take you!”
Series 13 winner Colin Thackery said: “Since winning Britain’s Got Talent my life has been turned upside down! I have signed a record deal, recorded an album and am in the process of writing a book! I have met so many wonderful people since auditioning, received so many kind messages and have lost count how many times people have taken my photograph! Signing up to BGT was one of, if not, the best decision I ever made!”

Our 2018 winner Lee Ridley, also known as Lost Voice Guy, was the first comedian to ever win BGT and his initial audition has reached over 10 million views. He has just finished a 60 date UK tour and has also released a book ‘I’m Only in it for the Parking’ as well as his own merchandise. Since BGT he has continued the comedy circuit and will be appearing at Edinburgh Fringe for his seventh performance there, as well as becoming a motivational speaker for charities and organisations about disability and comedy.

Since being crowned the winner of Britain’s Got Talent 2017, Tokio Myers has co-produced the Artists for Grenfell charity single in support of The London Community Foundation, has released his debut album Our Generation, the biggest classical crossover of 2017, and won the award for Breakthrough Artist of the year at the Classic BRIT Awards 2018. He’s currently working on new music.

Among the show’s successes, Susan Boyle has sold more than 25 million records worldwide, Diversity are about to embark on their 10 year anniversary tour ‘Born Ready’, while multi-platinum selling artist Paul Potts has sold six million records worldwide. BGT 2014 winners Collabro have had a No. 1 album and Calum Scott, Simon’s golden buzzer in 2015, was the first ever Britain’s Got Talent contestant to be nominated for a Brit Award for his single Dancing on My Own. Previous BGT Series 9 semi-finalist, Sheku Kanneh-Mason, who was part of the classical band The Kanneh-Masons, went on to win the BBC’s Young Musician of the Year 2016. Since appearing on BGT, Sheku has performed at the BAFTAs, the BBC Proms and the wedding of Prince Harry and Meghan Markle.