Hurler Patrick Horgan is Cork Person of the Month

Glen Rovers and Cork Senior hurling team star Patrick Horgan has been named as December’s Cork Person of the Month to mark his glittering hurling career to date.

Born and reared in Blackpool, Patrick “Hoggy” Horgan has been playing hurling from a young age, working his way up through juvenile and underage levels. He is known and admired as a fanatical Glen Club man. At this stage, he has won every honour in the game except an all-Ireland medal. Already a multiple All-Star award winner, he was also nominated as Hurler of the Year for 2019. He can now regularly be found in the Glen field every week perfecting his free taking skills with club mates, and helping Blackpool’s local future GAA stars perfect their technique. 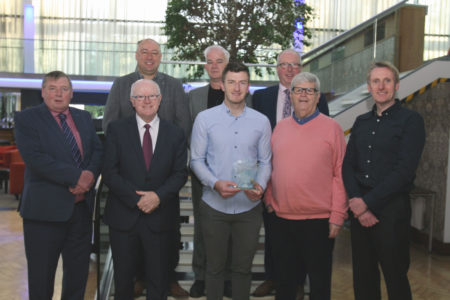 Last July, after Cork’s all-Ireland quarter-final exit, the then Cork hurling manager John Meyler said “I’m really disappointed for Hoggy. Look, he’s one of the best hurlers at the moment and for the last 10 years, an incredible hurler, an incredible stick person.” That day again, he put in another ‘man of the match’ display scoring a remarkable 3-10, which also won him the national GAA/GPA Player of the Month.

Patrick has already eclipsed the great Christy Ring as Cork’s all-time leading scorer in championship hurling. Speaking on his award, Patrick said, “This is truly an honour to receive recognition for the work which I have put in. The determination, drive and support of the Cork GAA community is the reason why I’m proud to represent this great county in all that I do.”

At the recent Person of Month presentation, awards organiser Manus O’Callaghan said “We honour Patrick, Cork’s new Senior Hurling Captain, for his glittering hurling career to date, and also take the opportunity to congratulate him on his recent wedding to Ashley Lovett of Ballincollig. We wish him, and the new Cork hurling backroom team of Manager Kieran Kingston plus coaches Ger Cunningham and Diarmuid “the Rock” O’Sullivan a very successful 2020.”

Patrick Horgan’s name will now also go forward, with the other Persons of the Month chosen this year, for possible selection as Cork Person of the Year at a Gala Awards Lunch on January 17th 2020 at the Rochestown Park Hotel.