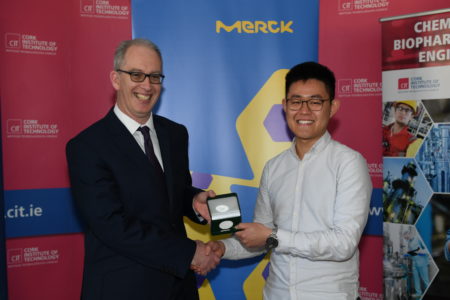 The leading science and technology company Merck, which has a Cork facility in Carrigtwohill, has announced the 2019 winner of the Merck Prize for Academic Excellence.

This annual prize of €1,000 and a commemorative medal is awarded for Academic Excellence in Chemical Engineering and began last year to mark Merck’s 30th anniversary in Cork.

Cork Institute of Technology (CIT) fourth year Chemical Engineering student Wen Ning Ching, who achieved the highest marks in the core taught Chemical Engineering modules, is this year’s winner.
Head of Site Operations in Merck Cork, Martin McAuliffe said, “As a science and technology company, Merck’s 30 plus years of success in Cork is largely driven by the high calibre of our employees. We are fortunate to be located close to leading universities and institutes such as CIT, as they are a key pipeline of technical talent that will continue to support our success into the future.” 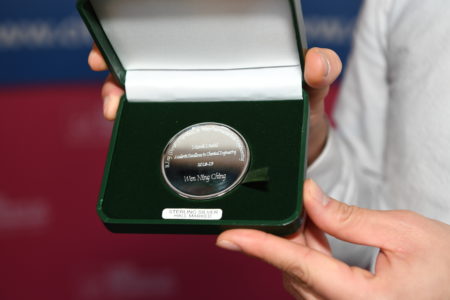 Also speaking at the event, CIT President, Dr Barry O’Connor welcomed the Merck Prize as continuing recognition of the on-going relevance of CIT’s longstanding Chemical Engineering degree and the deep-rooted partnership CIT has forged with the Pharma/Biopharma and Life Science industry in Cork.

Around 56,000 employees work to make a positive difference to millions of people’s lives every day by creating more joyful and sustainable ways to live. From advancing gene- editing technologies and discovering unique ways to treat the most challenging diseases to enabling the intelligence of devices – Merck is everywhere. In 2018, Merck generated sales of €14.8 billion in 66 countries.

Scientific exploration and responsible entrepreneurship have been key to Merck’s technological and scientific advances. This is how Merck has thrived since its founding in 1668. The founding family remains the majority owner of the publicly listed company. Merck holds the global rights to the “Merck” name and brand. The only exceptions are the United States and Canada, where the business sectors operate as EMD Serono in healthcare, MilliporeSigma in life science, and EMD Performance Materials.