A man who stood up and fought for Munster Rugby for over 20 years as CEO has been awarded an honorary doctorate at University of Limerick.

Garrett Fitzgerald, former Munster Rugby CEO, received the honorary degree of Doctor of Letters at a conferring in UL Thursday, attended by his family, friends and many former Munster colleagues.

Garrett, who retired as Munster CEO in June, said the award was “huge honour for me and my family”.

“I feel really honoured, it is a great occasion for myself and for all the people that I worked with over the years that helped me achieve a lot of things in Munster Rugby, and obviously for my family.

“It is a fantastic occasion and over the years I have developed an affinity with University of Limerick because of the closeness of the team and everything that has gone on with the building of the new High Performance Centre here.

“For me to receive this honour today is…I was thinking from being a young fella going to national school in Knockraha in Co Cork that no one ever heard of, with a pudding basin haircut as they called it and to be here receiving this, it is a huge transformation and growth period in my own life,” he added.

The honorary doctorate was conferred by University of Limerick Chancellor Mary Harney, who said UL was “very proud to confer this honour today; the esteemed recipient shares so many of our values as a University. 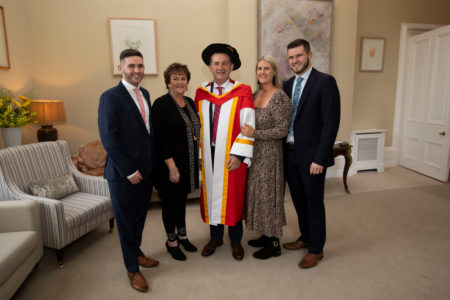 Garrett Fitzgerald, former Munster Rugby CEO is pictured with his family from left: son Jamie, wife Aine, daughter Megan and son Michael before the honorary degree of Doctor of Letters at a conferring ceremony at the University of Limerick.
Picture: Sean Curtin True Media. 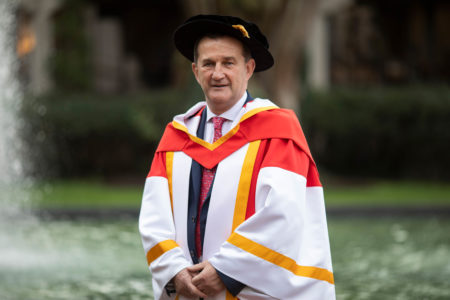 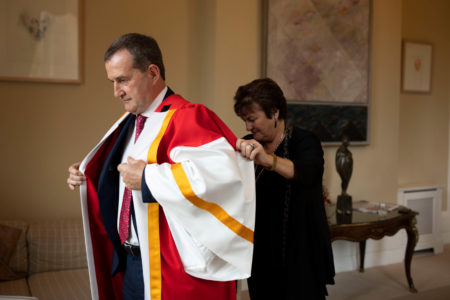 Garrett Fitzgerald, former Munster Rugby CEO is helped by his wife Aine before the honorary degree of Doctor of Letters at a conferring ceremony at the University of Limerick.
Picture: Sean Curtin True Media.

“Like UL, our newest graduate is a visionary with an ability to drive forward and get results. And for Munster Rugby, that drive and vision transformed the club and allowed it to build on its heritage and reach new heights.

“For two decades, Garrett Fitzgerald took that vision and with every ounce of pride and energy, made it a reality where through the support of his team, real tangibles were created for the people and players.

“Garrett, it is a real privilege to have you here in Limerick today.

“Your commitment to face every challenge makes you an ideal candidate to add to the roll of honour,” she added.

Garrett Fitzgerald retired in June as Munster Rugby CEO, a position he held for almost 20 years. He was the first CEO appointed to the province and was the longest-serving provincial chief executive in Irish rugby. During those 20 years, he spearheaded the province’s remarkable rise in the professional era and oversaw some of the club’s greatest achievements, both on and off the field.

Hailing from Knockraha in County Cork, Garrett Fitzgerald enjoyed early rugby success as a student at Christian Brothers College, Cork, where he won a Munster Schools Senior Cup medal in the 1970s.

That piece of silverware was one of many highlights in an 18-year playing career, during which time he played in the front row for UCC and Cork Constitution.

Garrett coached CBC to five Schools Senior Cup titles and he worked with Irish Universities, Munster Under 20s and UCC over 19 years as a coach.

He had the perfect mix of experience as a player, teacher, coach and in business when he took over as Munster Rugby CEO in 1999 and was at the forefront of the team’s march onto the international stage over two decades.

Garrett hailed the “connection between Munster Rugby and the University of Limerick” where the team’s state-of-the-art High Performance Centre is located and was officially opened in April 2017.

Garrett and Dave Mahedy for UL oversaw the project, which saw the centre designed and built adjacent to the UL Arena, with Munster occupying it in September 2016.

“I think everyone, down to the youngest players who have their development camps, to the older players, there is a natural affinity and a partnership between UL and Munster Rugby – and it is something that has grown through respect rather than being forced.

“I think it is very much a partnership and something that seems to be working really well.

“I got involved when professional rugby was very much in its infancy, and I was hanging off the deep end lots of times – to get that opportunity to do it and work in sport and do it in a city and a province that is sports mad…To be able to do it and have the connection with Munster Rugby, with all the clubs, with the city and the university, is a dream come true really for a person,” he added.