Sarah Greene is Cork Person of the Month for January

Glanmire native Sarah Greene has been named as Cork Person of the Month for January 2020 to mark her many international acting career achievements to date.

Over the last decade Sarah has featured in many films, TV series and theatre productions. Sarah’s most recent screen credits include starring roles in Dublin Murders, Penny Dreadful, Ransom, to name a few. She will soon be seen in the new 12-part BBC series ‘Normal People’, directed by Oscar-nominated Lenny Abrahamson. Based on the novel by Sally Rooney, ‘Normal People’ tracks the tender but complicated relationship of a couple from their school days in small-town in the West of Ireland, to their years at Trinity College. ‘Normal People’ won the 2019 Book of the Year at the British Book Awards for Sally Rooney and entered the New York Times bestseller list at No 3. 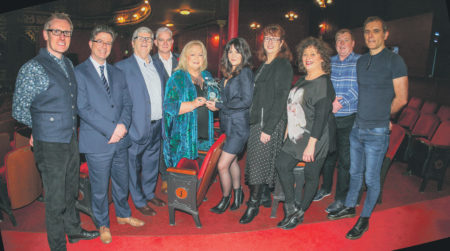 This year Sarah will also star in the yet to be released BBC One series ‘Roadkill’ alongside Hugh Laurie. This is a political thriller about a self-made Conservative minister who embodies the fictional future of the Conservative party. Comic-turned-dramatic actor Hugh Laurie plays the ruthless politician in this 4 part series.

Her work on the West End and Broadway in productions of The Cripple of Inishmaan with Daniel Radcliffe, of Harry Potter fame, won her huge acclaim. Sarah was nominated for a Tony award (Best Actress in a Featured Role) 2014 for her performance in this show, one for which she was already nominated for an Olivier Award in 2013 during it’s West End run and for which she was awarded the 2014 World Theatre Award for Outstanding Broadway Debut. The Irish Film and Television Board have also presented her with many awards for her performances in film and TV over the years. She was awarded the 2015 IFTA and Irish Film Board ‘Rising Star Award’ as well as winning the Best Supporting Actress IFTA for 2015 for her role in the feature film ‘Noble.’

Sarah, as a six year old, started her acting and singing career with Catherine Mahon-Buckley’s CADA performing Arts School in Cork. There she took part in various theatre productions, both plays and musicals, often at the Everyman and Cork Opera House, until she was nineteen years old. Sarah went on to train at the Gaiety School of Acting, from which she graduated in 2006. Since then, Sarah had huge success on stage and screen, both in Ireland and internationally.

Sarah Greene made a nostalgic visit back to the Everyman Theatre in Cork recently, where she started her career appearing in Pantomimes under the direction of her drama teacher Catherine Mahon-Buckley. You can watch a short video interview with Sarah on the Cork Person of the Year Facebook page.

Sarah Greene’s name will now go forward for possible selection as Cork Person of the Year 2020 at a gala awards lunch to be held at year’s end.