MIDLETON HISTORY: Why is the town name spelt with only one letter D?

Midleton is the name of a town in County Cork, Ireland. It’s one of the most misspelt Irish town names! with many people spelling it as Middleton. The fact that a person called Kate Middleton is now a celebrity has exacerbated this. Interestingly there is something of a ‘Royal reason’ (well a peerage) which explains why the town of Midleton is spelt with just one letter D

These days Kate Middleton is a world-famous celebrity. She is a member of the British royal family. Her husband, Prince William, Duke of Cambridge, is second in the line of succession to the British throne, after Prince Charles. Cork readers eyes will note that the Middleton surname somehow feels wrong. The reason is we – Cork people – are used to seeing it spelt as Midleton, because that is the name of the large town in County Cork. 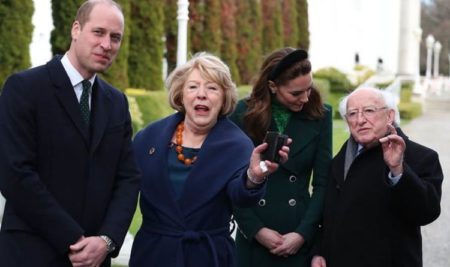 The town of Midleton is located in the East of County Cork, Ireland. It was formally created by a charter issued by King Charles II in 1670. Unfortunately, the original document does not survive,but Cork Historian and Tour Guide Tony Harpur notes there is a leather-bound manuscript copy of the original which was made a century later in 1784. The copy has an embossed cover which states that it contains the Charter of Middleton (two letter D’s), however, the text of the charter starts by using the spelling Midleton (one letter D). This is confusing, and becomes even more opaque when further on in the text the town is spelt as Middleton (two letter D’s).

Why is Midleton spelt as such, rather than as Middleton?

How then did the town become known as Midleton? Who decided on the current accepted spelling? For this we can thank a Peer.

In 1715 Sir Alan Brodrick (b. 1556 – d. 1728) – already a Knight – was was ‘raised to the peerage’ as Baron Brodrick of Midleton (one letter D). Just 2 years later, in 1717, he was elevated again, this time to being Viscount Midleton. It is clear then that the Peer always had one letter D, but the name of the town fluctuated. The typewriter didn’t become common until the 1880’s, so at the time the name of the town would have been handwritten. In sloppy handwriting, one could get away with a lot!.

Matters came to a head in 1845 when the 5th Viscount Midleton wrote to the Postmaster General in London to complain about confusion in the delivery of post. It appears some post intended for him was incorrectly being routed to a place called Middleton in Armagh, or Middleton near Birmingham.

The Postmaster General replied and said he had looked up the title of the Peerage and found it to be recorded as ‘Viscount Midleton of Midleton in the County of Cork’. The postmaster then directed that the spelling for the Cork town for postal purposes should henceforth be Midleton only (one D), to avoid further confusion.

So, the town of Midleton got its current spelling from a Peerage. We can say that Midleton has a Royal history of sorts. Although, if we are technical a Peer is not necessarily a Royal.

Fast forward a few generations, and in 1920 a St John (pronounced as ‘Sin Gin’) Brodrick was elevated to being the Earl of Midleton.

Keen readers will have noted above that we mentioned three peerages. What became of them? The ranks of the English peerage are  – in descending order:

The Midleton title existed at three ranks of the peerage.

What is the status of the three Midleton peerages today in 2020?

Firstly, we must state that the holders of peerage have no political power in Ireland today, so our musings here are out of historical interest only. Plus, we must note that the Brodrick family left Ireland for England as far back as 1765, so their day-to-day involvement in Irish affairs has been limited for some time. In England, their seat was stately home known as Peper Harow House, near Surrey, England.

Who is the current Lord Midleton?

At the time of writing in 2020 the current Lord Midleton is the Rt Hon Alan Henry Brodrick (b. 1949). He is the holder of the title of The Viscount Midleton and Baron Midleton. It is the practice to use the higher rank of peerage, so he uses The Viscount Midleton title only. He maintains an interest in the town of Midleton because he is listed as being on the Board of Governors of the Patron of Midleton College (Estd. 1696) which is an exclusive (€4180 to €10130 per annum) fee-paying day and boarding school with a Church of Ireland ethos. His name is given as ‘Mr A. Midleton FBHI, The Viscount Midleton’. It is understood this is a ceremonial role as the Patron is not involved in the day to day running of the College, and the College also has a Board of Directors (of Midleton College Company CLG.), and a Board of Management.

Alan Henry Brodrick (b. 1949) has a prestigious current role in England where he is President of the British Horological Institute. The Institute was founded in 1858, Its primary role is that of education, providing a standardised set of examinations for training horologists. It also maintains a list of members whom it considers sufficiently qualified to repair clocks and watches. One article about watchmaking refers to him as simply Alan Midleton. That is because peers often use their peerage as a surname.

Alan Henry Brodrick (b. 1949) does not enjoy a seat in the House of Lords, because the automatic right to site for hereditary peers was abolished in 1999. As was so many Irish peers the Brodrick family also have a peerage from Great Britain. So the current holder – Alan Henry Brodrick – is also styled as the 9th Baron Brodrick of Peper Harow, near Surrey, England. As his Irish peerage has a rank of Viscount – which is higher than Baron – he uses his Irish title.

Why isn’t there a stately home in Midleton today (it would make a fine tourist attraction!)?

Peers usually had stately homes in their hometowns. Many ‘big houses’ were burned in the 1920’s during Ireland’s struggle for Independence. The seat of the Midleton peerage (Surname Brodrick) was Ballyannan Castle. It is located West of Midleton, across the River Ballynadorra. It was a ruin long before the 1920’s. As mentioned in our introduction, the Brodrick family left Ireland for England as far back as 1765

Ballyannan Castle was a two-storey, fortified house with an attic. In 1653, Sir John Broderick, a Cromwellian settler took possession of an existing estate and rebuilt it into a fortified Tudor mansion. The lands were a reward for his military services in Cromwell’s New Model Army.

Ballyannan Castle consists of a rectangular block, of 3 bays long and 2 storeys high, with a rectangular projection near the centre of the west wall and circular towers, with gun loops at ground floor level, at 2 corners.

Today, Ballyannan still exists on maps because it became the name of the townland. The remains of Ballyannan Castle are situated on the grounds of a local farm (registered in the Land Registry in the name of a Mr Richard Barry of Baneshane, Midleton, Co Cork). As such the ruins are on private property, so they are not accessible to the public. They can be seen from a local causeway road which passes to the East of the site. The AbandonedIreland.com website shows photos of the interior which is in a poor state.

Is there any remnant of the Ballyannan Demense which is open to the public?

Yes, you can access Ballyannan woods, which are located further North of the ruined castle. Tourism marketing group ‘Ring of Cork’ publishes a map of the wood here. The 23.23 hectare (57.40 acre) woodland was purchased by Coillte in 1980.

Looking back at the history of forestry; In 1840, the 5th Viscount Midleton followed the advice of a valuer, Charles Bailey, and established a small nursery of about ¼ acre in a wood clearing. Fruit trees and conifers were grown here until the estate closed in 1964. Despite the persistence of the site as a woodland through at least the last three centuries, the oldest trees recorded on the Coillte inventory are only estimated to date to 1830. In a 2006 Forestry Management Plan the following was written:

“Visually, however, many trees are large and appear old. Oaks (Quercus sp.) estimated by Coillte to date from 1880 line the estuary foreshore. Large old lime (Tilia sp.) trees, thought to date from 1830, line part of the drive on the northern side of the forest. There are a few relatively uncommon trees, such as a large hornbeam (Carpinus betulus) and some relatively old crab apple (Malus sylvestris) trees. About a fifth of the site is dominated by sycamore (Acer pseudoplatanus) and/or beech (Fagus sylvatica) canopy with an open internal structure, allowing good visibility for walkers from the forest road into the forest and promoting the vernal flowers like bluebell. The shrub layer is primarily composed of patches of elder trees (Sambucus nigra), while sycamore saplings are also frequently present throughout the site. The composition of the field layer depends on the shade coming through the canopy and ranges from ivy and shadetolerant moss under heavy canopy, to thick, tall bramble under light canopy and in gaps.”

We recently wrote about another peerage in Cork, which is still extant. Check out our article: DID YOU KNOW: There is still an ‘Earl of Cork’ also known as ‘Lord Cork’ who sits in the British House of Lords