Baltimore RNLI was launched this morning (Tuesday 25 August) to go to the assistance of two yachts in difficulty in Crookhaven Harbour off the coast of West Cork. 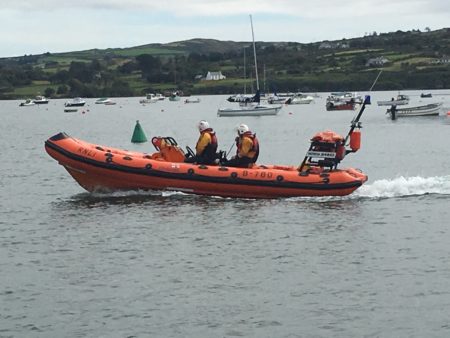 File photo of Baltimore’s inshore Lifeboat which is used on calmer days, but today the All-weather boat was needed in the stormy conditions

Baltimore lifeboat arrived at Crookhaven at 9.34am and found that the two yachts were both dragging their moorings in the strong wind and rough sea conditions. The volunteer lifeboat crew launched their y-boat with two crew onboard, Kieran Collins and Micheal Cottrell. They secured extra lines from the yachts to moorings nearby and assisted one yacht by dropping an extra anchor upwind, to hold her steady. After talking to the yachtsmen and assessing that the vessels were now secure and holding, and that all people on board were safe and well, the y-boat was recovered and the lifeboat made its way back to Baltimore at 10.25am, arriving back at station at 11.22am.

There were seven volunteer crew onboard the lifeboat, Coxswain Kieran Cotter, Mechanic Nigel Kehoe and crew members Aidan Bushe, Jerry Smith, Colin Whooley, Micheal Cottrell and Kieran Collins. Conditions at sea during the call were stormy, with a westerly force 9 wind, gusting 10-11 at times, and a 5m sea swell.

Speaking following the call out, Micheal Cottrell, Baltimore RNLI Volunteer Crewman said: ‘The skippers did the right thing in looking for assistance as soon as they knew their moorings weren’t holding, especially considering the storm hadn’t reached its full force at the time. If you think someone is in difficulty at sea or along the coast, call 999 or 112 and ask for the Coast Guard.’

AREA: WEST CORK, NEWS
‘No house parties’ clause for students living near University
Previous Post
Thanks for adhering to the COVID19 guidelines