“Taxi drivers for many years now have felt that they are not listened to. They are the last to be acknowledged when it comes to transport.

Today, they have come out to say that they will not take that anymore.

There are 22,000 taxis on the road, between 1,000 and 1,500 in Cork, and their families relying upon them to bring in income. At the minute they are facing enormous uncertainty, and potentially significant hardship. What they are demanding is not unreasonable.

Firstly, they seek respect and recognition. Taxi drivers play a crucial role. Their work is often challenging, and drivers have faced abuse and ill-treatment in the past.

They are often the key link in their communities, who know and engage with regular customers, and help those with mobility challenges to function. This is true in urban areas as well as rural.

Very often, they are a key enabler for other forms of public transport. I would reject any notion that they are not a public service vehicle – they are public transport, and they should be treated as such.

Taxi drivers deserve real engagement. The Taxi Advisory Council is not fit for purpose. Real engagement requires giving a voice to the single plate owner, as well as all others in the industry.

It is abundantly clear that we need financial support for taxi drivers. The cost of owning a taxi has gotten more and more expensive over time. Fixed costs now add up to over €11,000.

The current income support schemes are not suitable for rate-based work such as taxis. If they go back to work, they will lose the PUP, but will only be on a fraction of the work.

I have also raised issues in the past around the adverse situation older drivers face. 23% of drivers in the industry are aged over 66 and as a result are at a higher risk of complications from Covid-19, but also are not eligible for the Pandemic Unemployment Payment (PUP).

15% of drivers in the industry are over 70. While the public health advice is for these people to limit the number of close contacts they had, many were forced back to work early, due to the lack of state support. 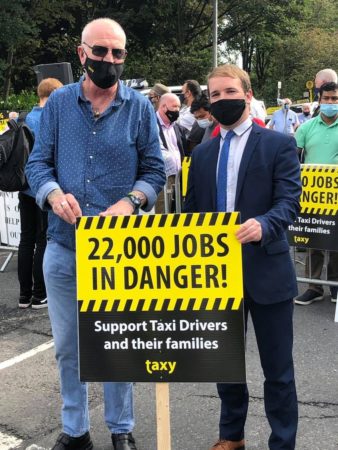