The 2019/20 season of the Winning Streak game show was concluded at RTÉ studios in Dublin on Wednesday (16th September) as ten players took part in two separate game shows which paid out a total of €401,000 in cash prizes. 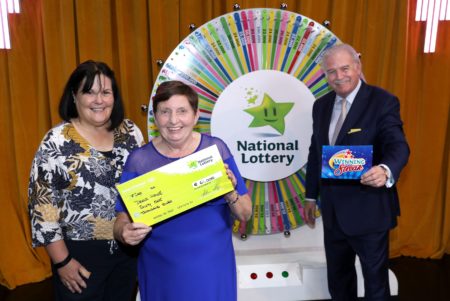 Among the big winners was Cork woman, Margaret Cafferkey from Mallow who was playing on behalf of her brother, Denny Hawe. Margaret swept aside her opponents and spun the wheel to amass a total of €61,000 in cash prizes.

Five of the selected players were originally due to appear on the Winning Streak TV Game show on Saturday 21st March but this was later postponed following government restrictions due to Covid-19. An additional five players from Cork, Dublin (2), Louth & Meath were later selected from a catch-all draw which recently took place at National Lottery HQ in Dublin.

Margaret Cafferkey stepped in for her brother Denny at Winning Streak and was more than happy to do her brother a good turn. She is a huge fan of the show and upon learning her brother’s name was one of the final five to be selected, she was a mix of shocked and excited at the same time. While Denny didn’t take to the Winning Streak stage, he was more than happy to watch his sister from the sidelines at RTE studios.

Margaret has three adult children of her own and seven grandchildren and in her spare time she loves to go social dancing. She grew up in Mallow in Cork and as well as Denny she also has another brother Bertie.

The Winning Streak National Lottery game show is co-presented by Marty Whelan and Sinead Kennedy and features some perennial favourite games including Play or Pay, Roll for Riches, WinFall and Electric Dream – where one player is guaranteed to win an electric car worth €25,000.

Attendance at the two Winning Streak game shows was in strict adherence to Government guidelines and attendees only included players and the requisite National Lottery and KPMG personnel. Each participating player had the opportunity to play the full suite of Winning Streak games with the same prizes on offer, whilst at all times ensuring all social distancing and health and safety guidelines were followed. The National Lottery has confirmed that this event will not be broadcast on RTÉ television.

Last August, the National Lottery and RTÉ announced that Winning Streak will not be returning this Autumn due to ongoing restrictions related to Covid-19.