Imagine if a City Centre in Ireland burned in the present day, and the cost was €155 million! It’s unthinkable, isn’t it?

Well, that is precisely what happened 100 years ago. Back on 11th and 12th December 1920 a series of events took place which we now refer to as ‘The Burning of Cork’. More than 40 business premises, 300 residential properties, the City Hall and Carnegie Library were destroyed by the fire set by Crown Forces. The economic loss was estimated as including over £3 million Pounds Sterling (equivalent to €155 million in 2019 money) worth of damage, while 2,000 were left jobless and many more became homeless.

In the present day (2020) Grand Parade, in Cork City, has a few derelict buildings, most of which back onto South Main Street. These aren’t related to the burning of Cork! but they are eyesores earmarked for development. Cork City Council has put large posters over them from time to time to promote various events. These posters are called ‘scrims’. A new scrim marks the 100 year anniversary of the ‘Burning of Cork’ by Crown Forces. 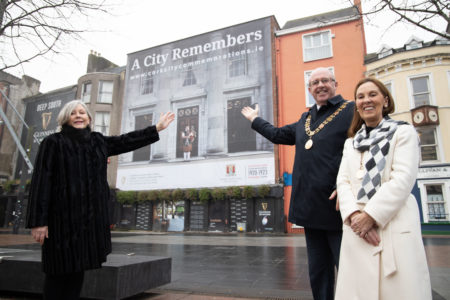 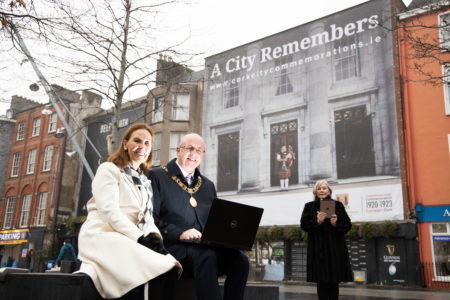 A number of small scale commemorative events, in line with public health guidelines, will be held over the weekend to commemorate this pivotal night in the history of the city when up to five acres of the city’s commercial centre was set alight and up to 50 buildings razed to the ground by Crown forces including City Hall and the Carnegie Library.