The General Manager at the Cork International Hotel, Carmel Lonergan has scooped an award in recognition of her career, charity work and contributions to the local community.

Carmel was awarded the Southside and District Special Business Award.

Carmel said: “I am so honoured to have received this award. Whilst the hospitality industry is challenging and certainly has faced extremely difficult periods, there is a unique level of resilience, passion and determination within the industry that sets us aside from so many other industries.

“Hotel guests are the main purpose of our business and we aim to always ensure that exceptional care is taken of them and they receive impeccable service when they come to the hotel. I am incredibly passionate about guest care but also team care. In fact, I refuse to use the word ‘staff’ and will always be heard correcting people and request that the word ‘team’ is used.” 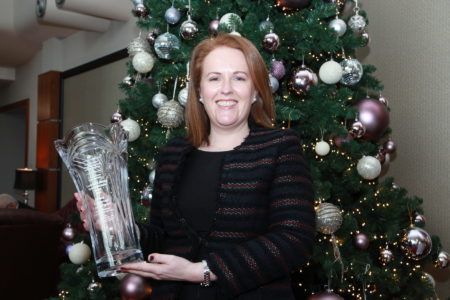 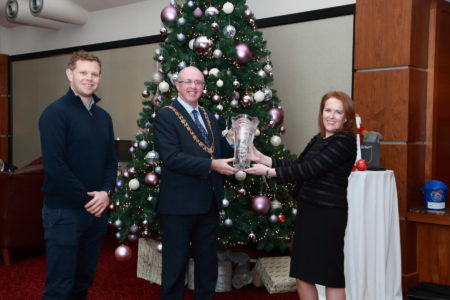 Managing Director of Trigon Hotels, Aaron Mansworth said: “We are delighted that Carmel has received this award and it is very much deserved. The longevity of the team at the Cork International Hotel is testament to how the hotel is managed and there is immense pride to be found by all who work there. Carmel and the team in the hotel have also invested significantly in the “Southside and District Sports Awards” as the main sponsor to recognise the contributions to those within the community. Recognising the achievements of local people at grass roots level is a testament to Carmel and the hotel’s commitment to its responsibility as a community business.”

Since its inception over 11 years ago the Awards has recognised over 130 local sporting individuals and teams located in the community be it in their achievements or contributions to sport.

Something that Carmel has always been heavily involved in is fundraising and also community projects. This is an area that Carmel puts significant personal time and effort into as she is acutely aware of the challenges faced by charities and communities and is also grateful for the support that they give to the hotel.

Corporate social responsibility is incredibly important to the team at the Cork International Hotel and so each year, they nominate a charity that they will work with for a minimum of a 12-month period. Carmel joined the Bumbleance fundraising committee for two years when they were the charity of choice and with the team at the hotel, over €30,000 was raised during their tenure with the Cork International Hotel which contributed to a new BUMBLEance vehicle being allotted to the South West of Ireland. The current charity partner, the Rainbow Club, which is a centre for children with autism in Cork has been able to accelerate the opening of a new facility as a direct result of a fundraising drive by the hotel, which resulted in €50,000 being raised for the charity over the past 18 months.

Hospitality was not always the plan for Carmel, as she had initially contemplated a life in healthcare and looked at following the footsteps of her mother who is a nurse in Tipperary. However after a summer part time job in a local coffee shop she began a training programme with the Dunraven Arms in Adare over 20 years ago. Carmel knew then that she wanted to embark on a career in the hospitality industry as she thrived on the fast pace and the varied opportunities that were available.

She studied hospitality management in the GMIT and on completion of her time there, she travelled extensively gaining experience in London and the United States before returning to Ireland and choosing Cork as her home.