A delighted family in West Cork are celebrating today after they scratched their way to a pre-Christmas fortune of €75,000 on a National Lottery scratch card. Lucky dad, Tomasz Bogdanski from Clonakilty travelled to National Lottery headquarters in Dublin to collect his family’s €75,000 prize just days before Christmas.

The Cork man who is originally from Poland, purchased his winning €5 All Cash Platinum scratch card at the Spar store on Clarke Street in the centre of Clonakilty town in Co. Cork. However, he has his wife, Anna to thank for his top prize win after previously cashing in another winning ticket to get the big prize win. 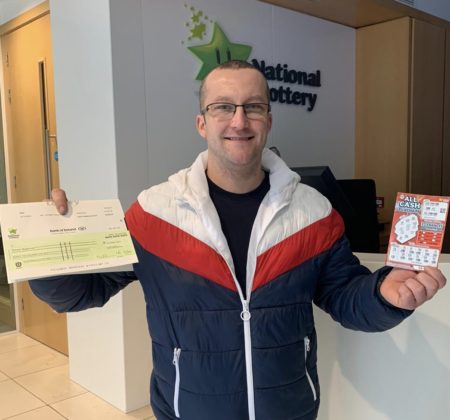 Tomasz Bogdanski from Clonakilty in Co. Cork celebrates at Lotto HQ in Dublin city centre after he picks up a cheque for €75,000 after he won the top prize on €5 All Cash Platinum scratch card.

He said: “It’s an amazing prize to win as a family and to win it just days before Christmas is even more special. Of course, I have to thank my wife, Anna for this win, she is the lucky one really! She likes to play a scratch card every week and just the other day she won a €30 prize. It’s a smaller prize but it’s still an exciting moment to win a prize! Afterwards, we were out for a walk and as we passed the shop, we decided to cash in her €30 prize but seeing as we were on a lucky streak, I suggested that we buy two €5 scratch cards so that we could have one each. When we got home, we sat down to scratch them together and we just sat in silence when the €75,000 symbol appeared on the scratch card. It was a lovely moment. You hear about big scratch card wins all the time but you never expect it to be you.”

The joyous Cork family have had a number of days to let their huge €75,000 win sink in properly and their focus has now turned to enjoying their Christmas before they consider any spending plans for their money.

“We consider ourselves very lucky in life more than anything else. I have a beautiful family and we just want to enjoy the Christmas holidays as much as we can. We do have some plans for the money but all of that can wait until the New Year. I might consider upgrading my car in the coming weeks and I have promised the family a proper sun holiday once we get over Covid-19,” added the delighted Cork family man.