The Courtmacsherry All Weather Trent Class RNLI Lifeboat Frederick Storey Cockburn was called out this afternoon Sunday at 3.40 pm, as persons reported a surfer in difficulties off Garrylucas Beach near the Old Head of Kinsale. Once the crew bleepers were activated by Valentia Radio, the Courtmacsherry Lifeboat under Coxswain Ken Cashman and crew of 6 were underway from their moorings in the harbour within minutes and proceeded at full speed to the area of the causality. Conditions at sea today were windy with a good swell in open seas. The Lifeboat reached the coastline off Garrylucas within 20 minutes of being called out and proceeded to carry out a detailed search of the area while the Old Head & Seven Heads Coast Guard unit searched from the shoreline. The area was comprehensively searched over the next 40 minutes and once there was no finding of anybody in difficulties, the search operation was stood down. This was the third callout over the weekend for our Lifeboat following a callout to a swimmer in Broadstrand on Friday evening and another callout on Saturday morning, both under Coxswain Mark Gannon, when the Lifeboat crew were on their weekly crew training exercise, they were called to go to the aid of four persons in difficulties off Garrettstown strand. Thankfully the swimmers were rescued by nearby surfers as the Lifeboat reached the area.

Philip White, the Courtmacsherry RNLI Voluntary Deputy Launching Authority said “Great credit is due to all our volunteer crew members who rushed to answer the callout whenever help was required at sea this weekend. Philip thanked the persons onshore that called the rescue services at 112 or 999 as every minute is so important to persons in difficulty no matter what the outcome of a search is.

The Lifeboat returned to its base in Courtmacsherry and has refuelled and restocked, in readiness of whenever the next call to action may occur. 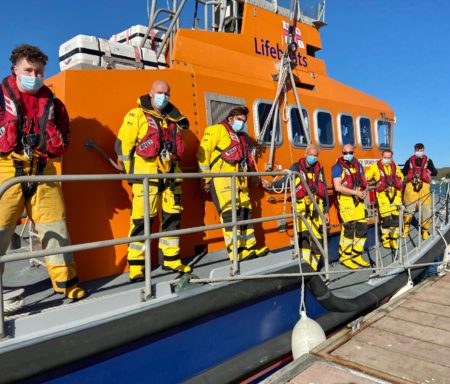 Today’s crew after returning to Courtmacsherry