Lord Mayor of Cork, Cllr. Joe Kavanagh, today officially opened 64 new homes and also turned the sod on two further housing developments of 62 more homes for Cork City, due to be constructed in the coming months.

Nine new homes were opened in the heart of the city on Shandon Street and John Philpott Curran Street. This development is comprised of a protected structure and two formerly derelict buildings, which were acquired and restored by Cork City Council to become homes. This scheme, comprised of five one-bedroom and 4 two-bedroom apartments, is aimed in particular at housing older persons, who can downsize to a more accessible, centrally located apartment, in this historic area of Cork. 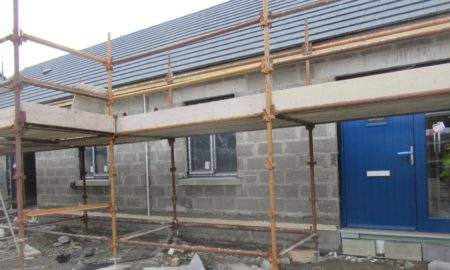 The Lord Mayor then opened a further seventeen new homes nearby in Lower John Street, another former derelict site regenerated by the City Council, in a scheme which will be run by Focus Housing on behalf of Cork City Council and will be comprised of one-, two-, and three-bedroom apartments.

He and the Lady Mayoress Stephanie then travelled on to turn the sod at two new developments – firstly at Railway View, Ballyvolane, which is to be eight new homes and then at Middle Glanmire Road, which will be a development of fifty-four new townhouses, twenty-seven of which will be affordable housing for Cork City Council to be offered for sale to eligible applicants and the remaining twenty-seven will be allocated to those on the social housing list and will be managed by Tuath Housing Association.

“I’m incredibly proud today to open so many homes for the people of Cork. It’s truly uplifting after what has been at times, a dark year, full of worry for many. It is my hope that these homes will soon be a source of comfort, security and joy to the families and communities who will live in them. I thank all involved in bringing these vital projects to fruition.”

“Housing is once again at the very forefront of Cork City Council’s objectives and will remain so for the coming years. Despite the difficulties posed by the pandemic and public health restrictions, our housing delivery programmes are buoyant and remain very much on track. I would like to acknowledge the efforts of all involved and assure people that the City Council will continue to lead the way in the delivery of more homes”.