A team led by Professor of Marine Biology James Bell from Te Herenga Waka—Victoria University of Wellington in New Zealand and Professor Rob McAllen from University College Cork has been studying the loss of possibly thousands of sponges from the underwater cliffs inside Lough Hyne (Loch Oighinn).

The team secured funding from the National Parks and Wildlife Service of the Department of Housing, Local Government and Heritage to study this unusual event.

Professor Bell, who is in Te Herenga Waka—Victoria University of Wellington’s Te Kura Mātauranga Koiora—School of Biological Sciences, has spent a large part of his academic career working in Lough Hyne. His PhD at University College Cork investigated these unusual sponge communities in the semi-enclosed saltwater lough on the south coast near Skibbereen. 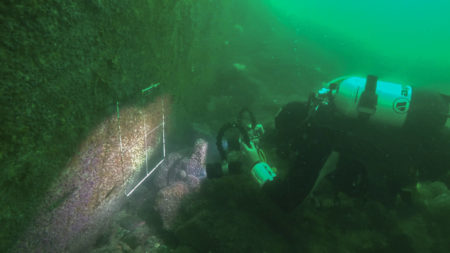 While it remains unclear why so many of the sponges experienced such a strong decline in numbers between about 2010 and 2015, in the past couple of years there have been signs of a potential natural recovery of the affected species.

In a paper published in Science of the Total Environment this week, Professor Bell and co-authors discuss the possible reasons for the drop in numbers and the implications for life in other temperate mesophotic ecosystems (TMEs), a layer of the sea floor typically extending from about 20 metres to 30m below the surface to 150m, and home for numerous invertebrates like sponges, sea fans and sea anemones.

The researchers used 30 years of scientific surveys (1990–2019) and opportunistic observations on the subtidal communities of Lough Hyne to gain insights into the long-term stability and vulnerability of those ecosystems. They then considered the possible causes of observed changes and discussed the importance of regular monitoring for TME conservation around the world.

The Lough Hyne Marine Nature Reserve is the only one of its kind in Ireland. What makes it unique, and a magnet for marine biologists, is it hosts many rare species and contains a high number of habitats within a small area of about 0.5 square kilometres.

It is also a scientific curio, and a boon for scuba-divers, because its rich mesophotic cliff communities occur in far shallower conditions than elsewhere in the Atlantic Ocean, a consequence of its relatively murky waters and sheltered location.

Professor Bell says long-term sponge abundance reconstruction showed the number of sponges on the cliffs had been relatively stable for at least 20 years until 2010.

“We don’t know for sure, but a range of opportunistic observations indicated that the decline in numbers occurred between 2010 and about 2015. The innermost sites were affected the most, suggesting the change originated inside the lough or that its sheltered conditions exaggerated an effect starting from the surrounding coast.”

There were several possible causes, including outbreaks of disease, increases in nutrients or heatwaves. Research is still ongoing into the cause, although changes in water chemistry remain one highly likely cause.

Professor Bell says it is encouraging to see some signs of a natural recovery.

“While we were obviously very concerned to see the sponge populations in the lough decline so much, we were very surprised to see new sponges reappearing after just a short time.”

The Minister of State for Heritage and Electoral Reform, Malcolm Noonan, says the Irish Government is happy to support more work at the lough.

“I’m delighted to support this important work in Lough Hyne—a site that has been globally recognised for its richness in biodiversity—and to hear of the early signs of potential recovery from its recent declines.

“I am also committed to providing ongoing support to these scientific investigations so that we may better understand the causes of the decline, and what is influencing its potential recovery, so that we can apply those lessons to our wider marine environment, and to help secure a biodiverse, resilient marine environment.”

Professor Bell says the sudden, unexpected decline of the sponges shows the importance of monitoring these temperate mesophotic ecosystems around the world.

For Te Herenga Waka—Victoria University of Wellington PhD candidate Valerio Micaroni, the research was a chance to apply his interest in marine biodiversity conservation and in “animal forests”, those habitats formed by animals permanently attached to a substrate, like sponges, corals and anemones.

“I liked the project because it allowed me to apply my knowledge to a real problem and to contribute to the conservation of an important ecosystem.”

Professor Bell recently gave his inaugural lecture at Te Herenga Waka—Victoria University of Wellington on how tropical marine sponges may be among the “winners” as organisms adapt to anthropogenic changes to oceans and the climate.

NEWS
Skibbereen #WestCork and Fermoy #NorthCork are winners and runners up at the .IE Digital Town Awards 2021
Previous Post
Lord Mayor opens 64 new homes and turns sod for another 62 homes in Cork City
Next Post
Tweets by @TheCork_ie