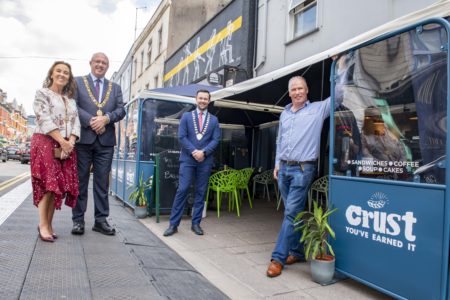 On Wednesday afternoon, The Lord Mayor Cllr Joe Kavanagh, Lady Mayoress Stephanie Kavanagh and Eoin O’Sullivan, President of the Cork Business Association took to the streets of the city to meet with business owners, welcoming them back to work. Over lunch in the Metropole to celebrate, Eoin O’Sullivan presented the Lord Mayor with a special recognition award for all his hard work and support throughout his term in office.

Lord Mayor Joe Kavanagh and CBA President Eoin O’Sullivan met with some local businesses to discuss the reopening of retail and hospitality in Cork City.

The pair met with Pam O’Regan from Saville and Eddie Mullins from Fitzgerald’s Menswear to discuss how business has picked up since they reopened their retail outlet.

Cllr Joe Kavanagh and Eoin also met with Patrick and Pat Keane from Keanes Jewellers to discuss the pedestrianisation of 17 City streets in the city and the effect it has for different businesses and customers.

Vibes and Scribes is also back open and were welcoming customers back into their store to reignite their imagination and passion for craft and artwork for the Summer months.

During their walk through the city the Lord Mayor and Eoin met with food retailers Kevin Herlihy from Herlihy’s Centra on Patrick’s Street and Ellen Wang Gala on McCurtain Street. Food retailers reported satisfactory sales throughout the pandemic, and continue to build on this growth as the city reopens.

The Lord Mayor and CBA President continued on to the Victorian Quarter where they met with a number of business owners. Noreen Gannon from Gallaghers pub is counting down the days until she can reopen her pub to the public again, as it undergoes renovations.

Jim Kelsey from Crust was in full swing when the Lord Mayor and Eoin dropped in to chat. Crust is open for outdoor dining and thriving on the North bank of The Lee, supplying Corkonians with sweet treats, speciality sandwiches, and great coffee.

Philip Gillivan from the Shelbourne Bar had a number of punters enjoying a drink in their outdoor dining space.

Andy Ferreira and Arthur Little from Greenes spoke to the Lord Mayor and Eoin about business since they have reopened and how they are looking forward to reopening for indoor dining.

Phil and Michael Ryan of Isaacs Restaurant are also looking forward to welcoming customers back for indoor dining in their award-winning restaurant.

Sandra from To Have and To Hold has just opened the doors of her shop offering bespoke wedding and event florals, and occasion handmade bouquets. Sandra is a next door neighbour of the Metropole Hotel, where the walk concluded.

Here, Eoin O’Sullivan presented the Lord Mayor with the special recognition award, and
The Lady Mayoress with a bunch of flowers curated by The Best of Buds, who’re located in the Winthrop Arcade.

Members from the Victorian Quarter committee welcomed the Lord Mayor Joe Kavanagh and CBA President Eoin O’Sullivan to Harley Street. The Metropole Hotel held a soft opening for their new initiative, a food market on the Street which is currently home to a coffee truck, Bevs & Brews and a Taco van, Taco Rebel. This will attract people to visit, shop and enjoy the Victorian Quarter.

Eoin O’Sullivan spoke highly of the Lord Mayor and Lady Mayoress “The Cork Business Association would like to thank you for supporting and promoting local businesses throughout an incredibly challenging year for the business community. We would also like acknowledge the dynamic approach both the Lord Mayor and the lady mayoress have taken compared to your predecessor’s and no matter what the boundaries were you continued to serve the people of cork to the highest standards throughout the year.” 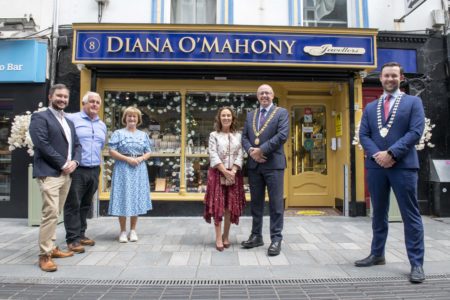