Spike Island Cork recently played host to Minister of State for Heritage and Electoral Reform, Malcolm Noonan TD who visited the historic island which has been making waves in Ireland’s heritage and tourism circles. 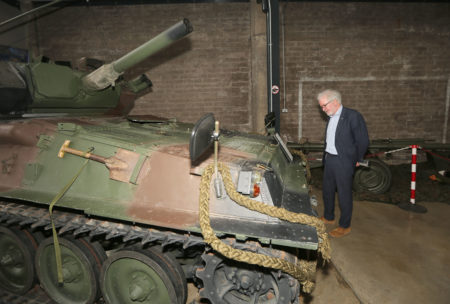 Malcolm Noonan TD, Minister of State for Heritage and Electoral Reform, pictured at the Gun Park during a heritage visit by the Minister to Spike Island in Cobh.
Picture: John Hennessy

Minister Noonan thanked Cork County Council for the fascinating visit to Cork’s own Alcatraz – noting in particular the three-storey barracks, which retains much of its original form, together with the remains of some important features and materials.

“The building is of particular importance as a reminder of the military heritage of Spike Island’. I am equally fascinated however by the lands outside the fortress on this lush green island, the mix of nature, wildlife and sealife alongside the incredible political and social history the island evokes.”

“It is very exciting to see the potential next steps to improve what is already a hugely enjoyable and interesting day out on the island. The island has an unbelievable history, and its military and prison past is well told. It will be great to see the other aspects of its history now explored and explained further, in new areas and exhibitions. In particular, the stories of the island residents resonate strongly with us today. They lived a wonderful microcosm of Irish life, away from the mainland, and Cork County Council is delighted to give a voice to their experience.”

Chief Executive of Cork County Council, Tim Lucey also welcomed Minister Noonan to Spike Island and highlighted how since its reopening in 2016, the island attraction has gone from strength to strength.

“Since 2016, Spike Island has tripled its annual visitor numbers from 27,000 to 81,000, won multiple international awards and contributed over €16 million to the Cork Harbour Economy, based on Failte Ireland estimates for domestic and foreign visitors. The island has also significantly increased its employment in line with visitor growth, creating dozens of jobs in storytelling, administration, ticketing, events and heritage roles.”

Having completed its first five years, a revised five-year business strategy is being prepared for Spike Island to ensure continued growth against the impact of the global pandemic. Minister Noonan viewed areas refurbished in 2016, including the 1850’s ‘Punishment block’, a feared Victorian era cell block, and the artillery gun park, now the largest covered artillery park in Ireland. Its collection includes cannons, military vehicles and tanks. Of particular interest were as yet undeveloped areas, earmarked as next in line for redevelopment and interpretation.

Cork County Council is setting its sights on reopening exciting new areas, such as the tunnels buried deep under the forts walls together with telling the social history of the island’s former residents, who called Spike Island home from the late 1700’s until 1985. A riot in the then island prison that year spelt the end of centuries of continuous residential usage. Research is currently underway by the island’s heritage team to uncover the stories from both the British and Irish era with interviews being recorded with surviving residents from the 1938 – 1985 period. 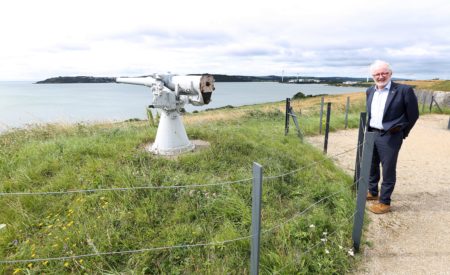 Malcolm Noonan TD, Minister of State for Heritage and Electoral Reform, pictured looking out to the mouth of Cork Harbour during a heritage visit by the Minister to Spike Island in Cobh.
Picture: John Hennessy 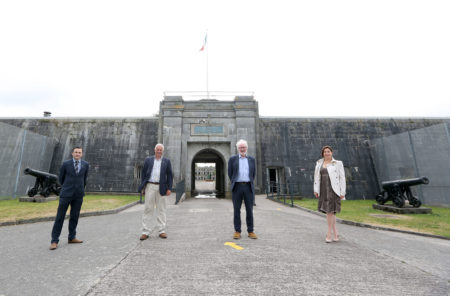 John Crotty, Spike Island General Manager, Cllr Anthony Barry, Deputising for The Mayor Of The County Of Cork, Malcolm Noonan TD, Minister of State for Heritage and Electoral Reform, and Mona Hallinan, Cork County Council Architectural Conservation Officer, pictured at the entrance to Fort Mitchel during a heritage visit by the Minister to Spike Island in Cobh.
Picture: John Hennessy

Spike Island has a rich 1300-year history, starting with a 7th century monastery, an 18th century fortress, the world’s largest prison in the 1850’s and centuries of island social life. The island was used as a prison island on four separate occasions, earning it the title ‘Ireland’s Alcatraz’. Outside the walls of its fortress, there are over 80 acres of scenic nature and wildlife, along with historic social housing, military emplacements and former convict burial grounds.