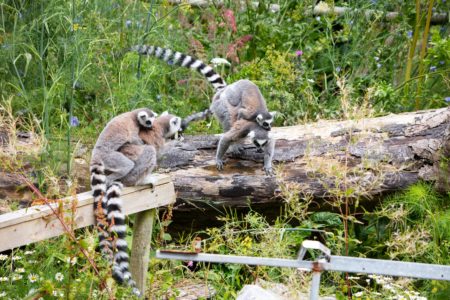 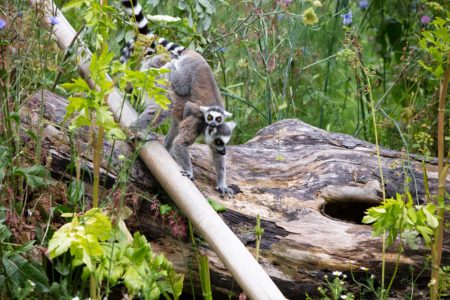 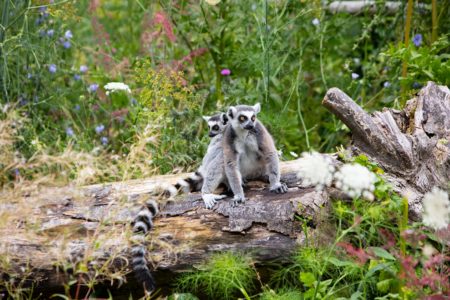 The first of the babies to be born at Fota Wildlife Park this year is a little male who was born on the 12th March to seven-year-old Quincy who came to Fota from WILDLANDS Adventure Zoo Emmen in the Netherlands in 2019 as part of a group of four female Ring-tailed Lemurs. Another female from the Emmen group, Aqua, gave birth on the 10th of April to a female. The father of both the young, named Collins, who was born at Fota Wildlife Park, passed away of natural causes the day before the male baby was born, on the 11th of March.

Lead Ranger, Teresa Power said about the births “We’re absolutely delighted with the birth of the two ring-tailed Lemur babies, which is an endangered species, and they are nearly five and four months old now. They really are at a perfect stage for the public to see them as they can be spotted daily clinging to their Mum’s back out on their island habitat or else scampering across the purpose-built mesh tunnel from their house. Even though she is smaller and younger than the male, the little female is very feisty and bossy towards her bigger brother. The two mothers and babies are living together with access to one of the wildflower islands on the lake, but we have plans to mix them with the rest of the group, all to be free-range in the Palm Walk area. Katie was the last baby Ring-tailed lemur born at the Park about 12 years ago to mother Joplin- they are both still here and will hopefully be out mixing with the new babies soon.”

Lead Ranger, Teresa Power continued “The Ring-tailed lemur species, made so popular by the movie Madagascar, has become associated with Fota Wildlife Park over the years due in great part to our free-ranging group – who have captivated and thrilled the visitors here for many years. We hope that these young lemurs, who are a delight to behold, will remind and educate our visitors as to the plight of the species as it is estimated that there may only be 3,000-3,200 individuals remaining on their native island of Madagascar. The species is now threatened with extinction mostly due to habitat destruction in Madagascar, and from the illegal pet and bushmeat hunting.”

The ring-tailed Lemur is easily recognisable by its black and white-ringed tail. About a metre in length if the tail is included, the animal’s fur is grey or rosy-brown and white with black markings around its eyes. They have a fox-like muzzle, and their lower jaw has teeth designed for grooming their fur which is shaped like a comb. Lemurs hail solely from the island of Madagascar, and the Ring-tailed variety moves between forests and scrub in southwestern areas of Madagascar. They are omnivorous and the most terrestrial of all lemurs, spending up to a third of their time on the ground.

Fota Wildlife Park is now open daily from 9 am until 8 pm, last entry is at 6 pm with BBQ meals served until 6.45 pm. To book a date and time slot to see the baby lemurs at Fota please go to www.fotawildlife.ie – please note while slots are booking up very quickly, there currently is availability during the August Bank Holiday weekend.