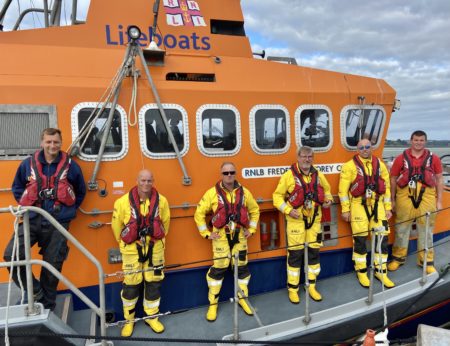 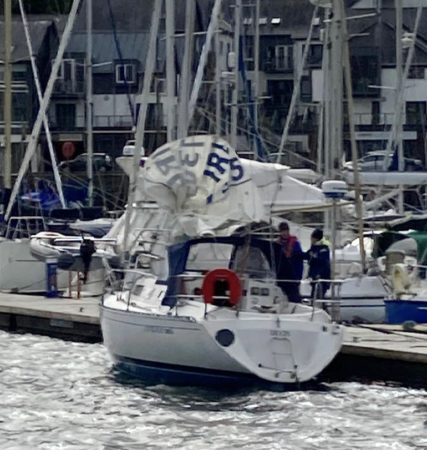 The Courtmacsherry All-Weather Trent Class RNLI Lifeboat was called out this afternoon Tuesday at 2pm, to go to the aid of a 30-foot Yacht with a lone sailor on board that got into difficulties 2 miles south-west of the Old Head of Kinsale in West Cork. The Courtmacsherry All-Weather Lifeboat, Frederick Storey Cockburn under Coxswain Sean O Farrell and a crew of 5 were away quickly from their moorings, after being alerted by the Coastguard, that the yacht had suffered engine failure and a sails blow out on passage from Glandore to Kinsale. Once the Lifeboat reached the causality at 2.26pm, Lifeboat Coxswain Sean O Farrell assessed the situation and as the causality was completely disabled and conditions at sea were worsening, a decision was taken to put the Lifeboat towline on board the yacht and proceed under tow to the nearest port of Kinsale. Conditions at sea today were fresh and blustery Force 5 winds with strong 3 metre swells off the Old Head. The Lifeboat proceeded to tow the causality back to Kinsale at a slow safe speed and arrived at the safe surrounds of the Harbour Marina at 4.30pm. The sailor was mighty pleased to see the Lifeboat today and expressed his extreme thanks to all involved in today’s rescue.

The Courtmacsherry RNLI Lifeboat voluntary Deputy Launching Authority Vincent O Donovan said “With the freshening winds today, it was great to reach the causality so quickly and give the Lone sailor the comfort that he required. Great praise is due again for the fast response of all the crew and officers who left their workplaces and rushed to the station, in order to help a fellow seaman in distress at sea this afternoon”.

The Lifeboat has now refuelled and restocked, in readiness of whenever the next call to action may occur. This was the 21st callout of 2021 for the All Weather Lifeboat Station in Courtmacsherry.

Picture 1 attached shows the disabled Yacht after being brought into Kinsale this evening.

Picture 2 attached shows the RNLI Lifeboat crewmembers under Coxswain Sean O Farrell after they arrived back to base in Courtmacsherry.