Fota Wildlife Park have announced the birth of five new Northern cheetah cubs (Acinonyx j. soemmeringii) to mother Grainne and father Archie. The Northern cheetah subspecies is considered Endangered by the International Union of Conservation of Nature (IUCN) as there are less than 800 left in the wild. A total of 238 cheetahs have been born at Fota Wildlife Park since 1984. 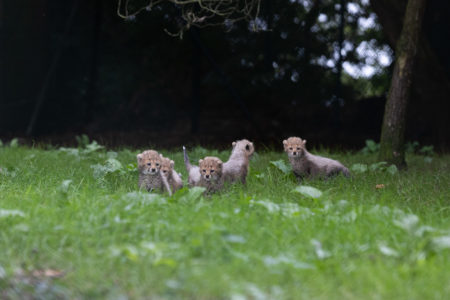 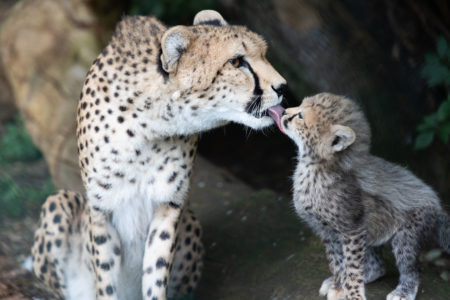 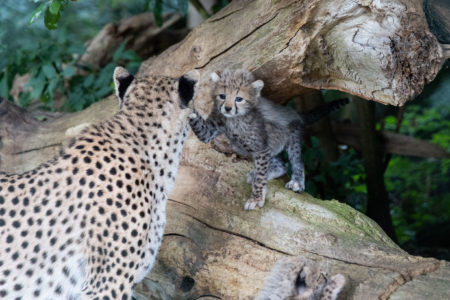 The five cubs, comprising of three females and two males were born on the 10th of August and spend several hours a day playing with Mum Grainne in their leafy habitat on Cheetah Hill at the County Cork visitor attraction. The cub’s mother Grainne is four years old and was born in Fota Wildlife Park, and she previously gave birth to a litter of three cubs on Saint Patrick’s Day last year, whereas twelve-year-old Archie is a first-time dad.

Head ranger, Julien Fonteneau said about the births “We are delighted to announce the birth of five Northern cheetah cubs. As a conservation charity and a zoological intuition, the continued participation and success in European Endangered Species breeding programmes (EEP) is very important. With each year, wild populations of cheetah are coming under greater threat of extinction from habitat destruction and human persecution.

“These births are a great way to educate the public about the collaborative work that zoos do under the auspices of EAZA breeding programmes (European Association of Zoos and Aquaria) to conserve the genetic diversity of endangered and vulnerable species, like the cheetah. For example, the father of the cubs, Archie, was transferred to Fota Wildlife Park from a zoological facility in Dubai to take part in the EEP here at Fota. The Cheetah is synonymous with Fota Wildlife Park, the image of the species is used in our logo and our director, Sean McKeown, coordinates the stud book for the breeding of the captive Northern cheetah population in European zoos.”

Head ranger, Julien Fonteneau continued “Personally this is my first time to witness the birth of such a big litter. Five cubs are certainly very rare. I’m thrilled to say that they all are thriving. The cubs are very active and a delight to see every day, up at the top of their habitat playing and annoying their mother Grainne, who seems to be taking it all in her stride. We’re asking the public to vote to name the cubs via an online form on our blog at www.fotawildlife.ie/news and to be in with a chance to win one of five Conservation annual passes.”

Not only is the Cheetah the fastest land animal in the world today, but the species has also been in existence for between 3.5 and four million years – making it the oldest of Earth’s big cat living species. The Cheetah had one of the most extensive distributions of any living carnivore, ranging throughout Africa and Asia and it is estimated that in 1900 there were more than 100,000 cheetahs throughout Africa and Asia but by 1975 this number had decreased to less than 20,000. Today the wild cheetah is now mainly confined to Southern Africa with small numbers in East and North Africa and a tiny population of less than 30 cheetah in Iran.

Open to the public since June 1983, Fota Wildlife Park is a conservation and education charity. Fota Wildlife Park’s vision is to inspire people to understand and conserve the biodiversity of the natural world. The Park’s core values of conservation, education, and research have ensured that it is uniquely placed to promote positive behavioural change towards environmentally friendly actions to its 460,000 annual visitors. All monies generated go directly back into ensuring the continuous care and welfare of the animals, the development of the Wildlife Park and into conservation projects.

Fota Wildlife Park is open daily from 9.30 am – booking online only at www.fotawildlife.ie