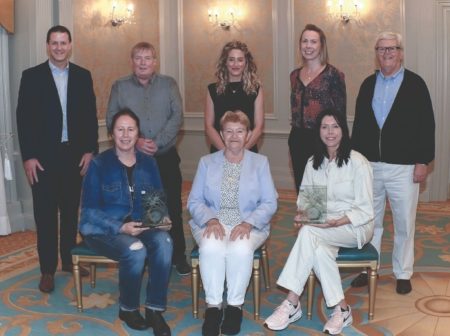 Multi-award-winning stage and screen actors, Catherine and Eileen Walsh, have been named as Cork Persons of the Month for November to mark their acting career achievements to date.

Catherine Walsh is predominantly a stage performer, and has been the subject of major critical acclaim for her performances over the years. She won a best actress award for her role in the play, Eden, at The Irish Times/ESB Theatre Awards in 2001 She has performed in over 15 different stage productions over the course of her career and 10 films, the most recent film being 2015’s My Name is Emily.

The younger of the two sisters, Eileen Walsh, had an early career break in her lead role as Runt in the stage version of Enda Walsh’s Disco Pigs. This was during her time as a student while attending the same acting course as her sister Catherine had attended in Trinity College Dublin a number of years previous. Since then, she has acted in a number of prominent films such as When Brendan Met Trudy and The Magdalene Sisters, as well as many TV roles such as the Pure Mule series. For her work in the 2008 film Eden, Eileen won Tribeca Film Festival’s Best Actress Award. She later won an IFTA award for the same role in 2009. More recently, she has featured in the comedy-drama series, Can’t Cope, Won’t Cope, and in the Netflix sitcom, Catastrophe.

Catherine and Eileen come from a family of five and grew up in Quaker Road, Cork City centre. At present, they reside in Dublin and London, respectively. The two acted together in Enda Walsh’s psychodrama, The Same, at the Galway Arts Festival, in which they both played the role of Lisa, a girl who meets her future self 10 years down the line.

Catherine and Eileen Walsh’s names now go forward, with the other Persons of the Month chosen this year, for possible selection as Cork Persons of the Year, at a Gala Awards Lunch on January 21st next.

Other Cork Persons of the Month for 2021 so far

New bus routes would neglect Togher and Ballyphehane
Previous Post
Where to buy refurbished (2nd hand) IT equipment in Ireland?
Next Post
Tweets by @TheCork_ie