Kilreen Celtic, an amateur soccer club based in Ballyphehane Park in Cork City, has been in existence for 50 years. In recent years, its numbers have grown from 20 children to 225. The underage teams range from Under 5 to Under 14. 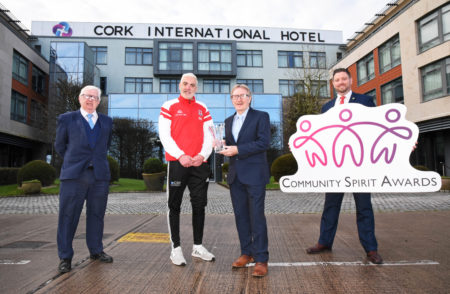 The club now has girls teams for the first time with the Under 7s and Under 9s competing in the Cork Women’s Soccer league. It also plans to run a youth incentive programme for teenagers aged 15-17 who have an interest in soccer.

The volunteer coaches give up their time six days a week for training sessions. In between training and matches they run successful fundraising drives for local charities including Ballyphehane Meals and Wheels and Street Angels homeless group.

General Manager of the Cork International Hotel, Carmel Lonergan said, “Kilreen Celtic is a wonderful example of what can be achieved with dedicated volunteers and a host of community spirit. The club is not funded and doesn’t have its own facilities but it is continuing to thrive thanks to its committed underage coaches. They give up their time week in and week out, in all types of weather, to help local children and teenagers to develop their skills and have fun. It is so important to instill a love of sport and keeping active in our young people and that’s what these coaches are doing. Grassroots clubs can’t exist without these volunteers and I know that Kilreen Celtic will continue to grow in the coming years.”

Nominations are open now at https://www.corkinternationalairporthotel.com/community-spirit-awards/