Network Cork will host its first online event of 2022 on Wednesday January 12th this year, with Chief Executive of Cork City Council Ann Doherty and recently-appointed Chief Superintendent Garda Tom Myers announced as keynote speakers for this year’s launch event, ‘Behind the Scenes’. They will be joined by another speaker, Cork’s longest-serving female fire officer, Irene Wallace. The online event will take place from 7.30 – 9pm, with registration free for members and €20 for non-members at https://networkcorkbehindthescences.eventbrite.ie.

The event represents the first of a year-long programme of innovative and inspirational events for the Network Ireland Cork branch under its new president, Maria Desmond, who is also the current Regional Fundraising Manager with Enable Ireland.

Stemming from her strong business background, Maria was last month appointed in the one-year voluntary role for Network Cork, the not-for-profit organisation that supports the personal and professional development of women in the Cork region, and is also the largest branch of Network Ireland in the country.

Speaking ahead of the event, Ms Desmond said: “One of my goals for the year ahead is to engage with other organisations; for us to learn more about them and vice versa. This month I hope members can learn more about our city and the work that goes on behind the scenes from the perspective of service provision. Resilience in the face of adversity, coping mechanisms and safety tips are also topics that will be addressed on the night.” 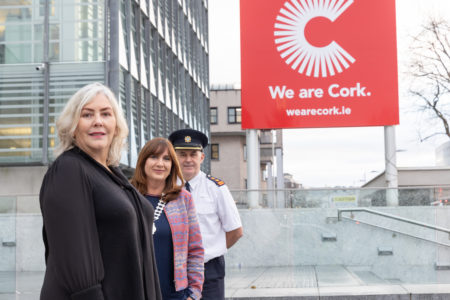 Within months of her appointment to the Chief Executive role in 2014, Ann Doherty was thrust into the city boundary review process, which after several reports, reviews and tense negotiations, led in 2019 to the first extension of the city boundary since 1965, growing its population by 85,000 to 210,000.

Ms Doherty has been credited with seeing the process through, a process which has since been referred to as “the single biggest re-organisation of local government in the history of the State.”

Ms Doherty said she welcomed the opportunity to speak at the event and was keen to meet with and engage with business owners from across Cork.

“I am looking forward to being part of Network Cork’s first event of 2022. Engaging with external stakeholders is an important part of my role here in Cork City Council. As well as giving information from the council’s perspective, I look forward to hearing more about Network Cork members’ businesses,” she added.

Tom Myers is originally from Cork City and has been serving as Chief Superintendent in Cork since October 2021. He joined An Garda Síochána in 1984, and has served in Dublin, Galway, Kerry and Cork.

Speaking about the upcoming event he said “I am delighted to have been invited to speak at this event. The changes and trends in our work in Cork, the challenges we face in going about our duties and the diversity within our force and the community we serve are topics I will address.”

Cork’s longest serving female fire officer, Irene Wallace manages a crew of six on the north side of Cork. They respond to all calls, including chimney fires, car accidents, river rescues, chemical fires and carbon monoxide combustion incidents. For this event, Irene will speak to Network Cork members about resilience and the challenges that she continues to overcome in her role.

Further information in relation to this event is available at www.networkireland.ie/cork