HAVE YOUR SAY: New Casual Trading Bye-Laws for City

Cork City Council is inviting the public, traders, businesses in the city and other stakeholders to have their say on new Casual Trading Bye-Laws

The current Casual Trading Bye-Laws for Cork City were adopted in 1996, and formally designate an area of Cornmarket Street and Kyle Street for Casual Trading. This is the only area within the city where casual trading is permitted at present. Cork City Council also grants special event casual trading licences for traders and markets operating in conjunction with events and festivals in the City. Since 1996, the demand for and nature of casual trading in the city has changed considerably. The Covid-19 pandemic saw a particular increase in requests for trading spots in the city. 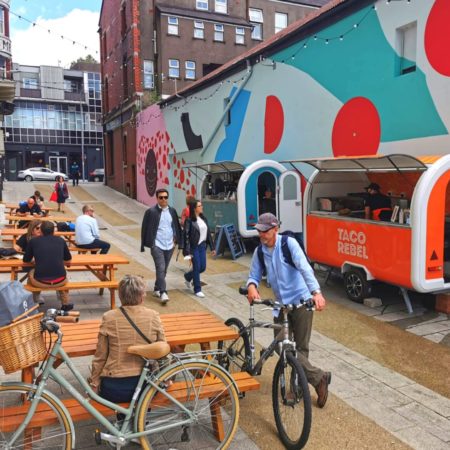 Harley Street (next to the Metropole Hotel) use to be a rat run for cars, but now it is pedestrianised and has some food trucks and seating. It also benefits from a pedestrian bridge to Merchant’s Quay.

The statutory public consultation process begins with the new bye-laws available to view online at https://consult.cork.city.ie or at the reception desk, City Hall until 11th March 2022.

The new bye-laws have been drawn up following consultation with key stakeholders and are informed by feedback from the Summer Casual Trading Scheme which ran last year.

The rules for trading and the criteria for allocating pitches have all been updated and strengthened in order to promote the highest quality trading and ensure the vibrancy and viability of our markets and public spaces. The new bye laws also aim to protect and enhance the historic Coal Quay Market area as a trading market.

The new bye-laws will also designate new casual trading areas, for example at Harley Street, Blackrock Village and some local parks. The fees for casual trading will be increased. Fees have not been increased since they were introduced in 1996. The fees represent good value for traders at a maximum of €15 per day to trade at a designated pitch.

Observations or submissions regarding the proposed bye-laws can be made up to 25th March 2022 and any submissions received during this period shall be considered by the Council.

Casual trading can play a vital role in the city: animating the streets, increasing footfall and offering an opportunity for residents and visitors to enjoy everything from a cup of coffee to a gourmet street feast in an outdoor setting.

Street trading and markets have historically played a significant role in the economic and social life of the city. Markets like the Coal Quay Market still fulfil an important role in the community; selling affordable and healthy produce and creating much-needed social connections. However, there is a balance to be struck and casual trading must complement and add value to the city’s wider offering.