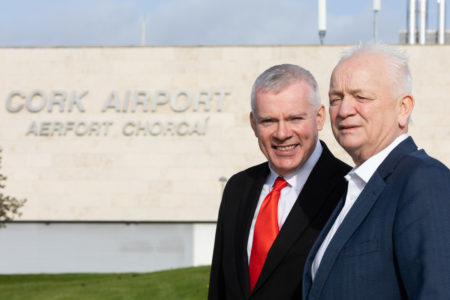 Niall MaCarthy, Managing Director Cork Airport and Eddie Wilson, CEO Ryanair DAC in cork International Airport for the Ryanair announcement of a third based aircraft at Cork and its largest ever summer schedule.
The announcement brings to 25 the number of destinations that will be served by Ryanair this summer at Cork Airport.
Photo Darragh Kane 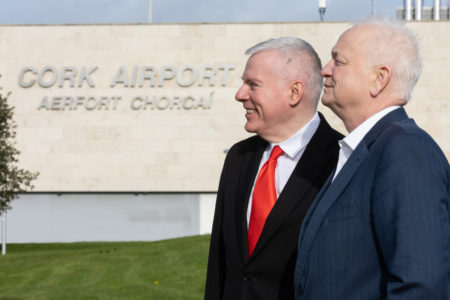 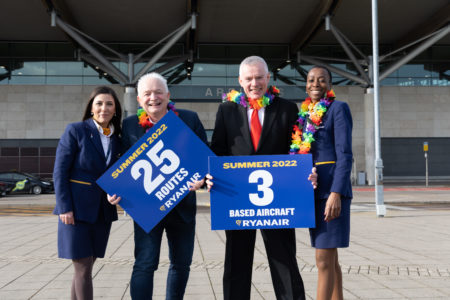 With an additional seven new Summer routes to top European destinations, and over 120 weekly flights departing to 25 destinations, Ryanair will now operate 150% of its Summer 19 (pre-pandemic) schedule, delivering much needed connectivity, driving in and out-bound tourism as well as supporting local jobs.

This investment in Cork Airport by Ryanair has only been made possible by the Cork Airport Recovery Scheme (“CRS”). This innovative aviation package is allowing Ireland (an island economy) and regional airports such as Cork, rebuild vital international connectivity following the devastating impact of the pandemic.

Ryanair is the only airline growing significantly in Europe, with many airlines cutting capacity and routes this Summer. Ireland must maintain lower access costs to enable a competitive playing field with other EU regions and airports in the likes of Italy, Portugal, Croatia etc. who are all battling for the same, but diminishing pool of airline carriers in Europe.

The delivery of 65 new “Gamechanger” aircraft (delivering 16% less fuel emissions; up to 40% lower noise emissions and 4% more seats) ahead of Summer 22 will enable Ryanair to add this extra capacity, however if Ireland is to maintain this record capacity and connectivity, then the Irish Govt. must support all airports in Ireland, including Dublin Airport, to extend traffic recovery schemes for Winter 22/23, which will allow Dublin and Cork Airports to secure vital connectivity, jobs and tourism.

To celebrate this exciting announcement, Ryanair has launched a limited-time seat sale with fares available from just €19.99 for travel until October’22. These fares are sure to be snapped up quickly, so make sure to log onto Ryanair.com before midnight Saturday, 19th Feb and make up for the lost summers of 2020 and 2021 with a well-deserved summer getaway.

“Following Ryanair’s announcement at Dublin Airport last month, where Ryanair launched its largest ever Summer schedule from Dublin, we’re delighted to now announce our largest ever Summer schedule from Cork, together with the news of an additional 3rd based aircraft for Summer 2022, representing a further $100m investment for Cork Airport. This is fantastic news for Cork Airport and the wider Southwest region, with Ryanair now operating over 120 weekly flights to 25 destinations this Summer, with great outbound sun destinations to Spain, Portugal, and Italy, but also giving inbound tourism a much-needed boost, restoring vital connectivity and securing jobs in the wider tourism industry.

With support from the Irish Govt., daa have been able to implement innovative incentive schemes which are available to all airlines to rebuild and incentivise traffic recovery this Summer. Ryanair’s latest investment at Cork Airport, which will deliver our largest ever Summer schedule, has only been possible following the implementation of Cork Airport’s traffic recovery incentive scheme for Summer 22.

If Ireland is to remain competitive vs. other EU countries and airports in Italy, Portugal, Croatia, etc. daa needs the Irish Govt.’s support to extend this temporary scheme (available to all carriers) at Dublin and Cork Airports until the end of Winter 22/23 in March 23, to ensure that as many Ryanair aircraft as possible remain based in Ireland this Winter to support Irish inbound tourism and connectivity. This will ameliorate the damage caused by the pandemic and the Govt. needs to urgently support this vital investment in infrastructure at Irish Airports, particularly this Winter, to ensure the continuity of airline seat capacity at all Irish airports.

In celebration of today’s announcement of our largest ever Summer schedule of 25 routes and over 120 weekly flights to the beaches of Spain, Portugal, France and Italy, we have launched a seat sale with fares from just €19.99 for travel until October’22, which must be booked by midnight Saturday, 19th February. With air fares likely to increase this summer due to reduced industry capacity, we encourage all customers to book early and scoop up these lower fares on Ryanair.com.”

“I am delighted with today’s announcement by Ryanair that a third aircraft will be based at Cork Airport for the upcoming summer season. With the addition of seven new and exciting summer routes including Pisa, Alghero (Sardinia) and Valencia, this will bring the total number of Ryanair routes available from Cork Airport to 25, giving lots of travel options for our passengers and the largest choice of routes to date. In addition, the frequency on London Stansted is being increased to three times per day, seven days per week and Manchester will also operate twice daily.”

“Research tells us that there is huge pent up demand for travel after the pandemic. People really appreciate good friendly customer service and uncrowded, pleasant indoor spaces which they will find at Cork Airport. It has been a long wait, but we know that the travelling public across the South of Ireland will support these routes strongly. In that regard, we expect a 750% increase in passenger traffic in 2022 v 2021 and to welcome over 2 million passengers once again to our terminal in 2022. We thank Ryanair for this vote of confidence in Cork Airport.”