Bishopstown Lawn Tennis Club has launched a drive for members to become ‘bike commuters’ when they are travelling to the club. The club has launched the ‘Get on Yer Bike’ initiative which will see club members aim to cycle 10,000 miles in total this year. Each time a member cycles to the club they will add their miles to the “Cycle Chart” in the clubhouse. Maps of all the cycle lanes in the area will also be posted in the clubhouse. Throughout the year the club will also host a number of fundraisers as part of the campaign for local charities. There will be prizes too for participants throughout the year. 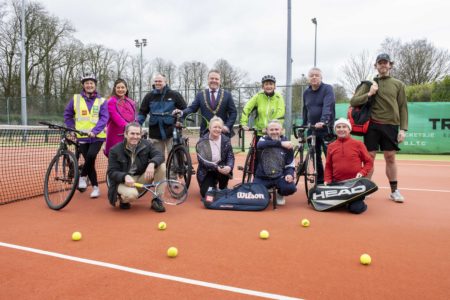 Lord Mayor of Cork, Cllr Colm Kelleher, said: “Congratulations to Bishopstown Lawn Tennis Club on this great initiative. The City Council has recently completed a number of upgrades to cycle paths in the area so it is fantastic to see this initiative in place which will encourage people to get on their bikes.”

BLTC Head Coach, Conor Twomey said: “We are very excited about our new ‘Get on Yer Bike’ Campaign which is encouraging our members to cycle to the club. Recently we have been very lucky in the Bishopstown area to see a number of new cycle lanes and upgrades of cycle paths so it will be easier than ever before to cycle to the club safely.”

Local Area Representative for Bishopstown, Sandra Murphy said: “This is a wonderful initiative by the Bishopstown Lawn Tennis Club. We are extremely fortunate to have had so many upgrades by Cork City Council within this community for our cyclists over the last number of months. Cycling is a great way of keeping fit, healthy and active and so it is wonderful to see the club promote this great concept along with tennis.”

CEO Philip Hosford from Bishopstown Credit Union said: “Bishopstown Credit Union is delighted to sponsor such an imaginative initiative through our Community Development Fund. Bishopstown Lawn Tennis Club is a fundamental part of the local community encouraging people of all ages to engage in sport. We are proud to sponsor local sports clubs, schools, local associations and societies through our Community Development Fund.”

Established in 1979 Bishopstown LTC is one of Cork’s leading tennis clubs and is well known for its friendly and welcoming atmosphere. BLTC has six outdoor floodlit artificial grass tennis courts and a clubhouse with changing facilities, function and meeting room and kitchen. The club recently saw a boom in membership as more people opted to take up tennis over the last two years.

Conor added: “Over the years we have seen our members increasing gradually. All levels of tennis ability are catered for from beginner to social to competitive. The club is also participating in and holding junior, senior and veteran competitions. New members are always welcome so have a look around our website or drop into the club. We want to become a major part of the community and make tennis available for all. We have big plans.” 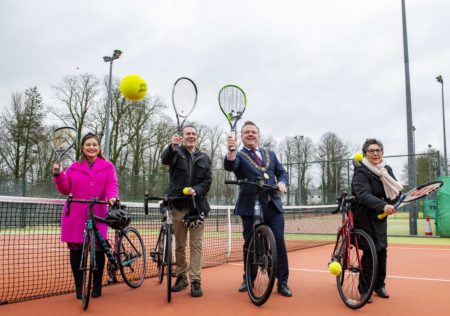