The award of this contract represents an important milestone for Energia’s North Celtic Sea offshore wind project and for Green Rebel’s growing presence in the emerging offshore wind market in Ireland. In the global market for offshore wind, two Irish companies working together – to facilitate the achievement of Ireland’s 2030 offshore wind and climate action ambition – serves to highlight the opportunity that exists within Ireland for a strong indigenous supply chain to support these multi-billion euro investments. 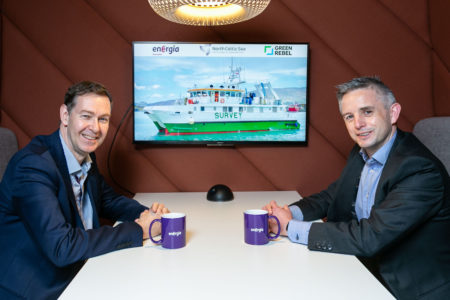 The successful achievement of Ireland’s 5GW offshore wind target by 2030 will rely on a relatively small number of projects, such as Energia’s North Celtic Sea project, and on harnessing the supply chain opportunity that these projects create. Green Rebel’s investment in Ireland ensures a local supplier of necessary services to the offshore sector at a time of increasing global demand and supply constraints.

Energia’s North Celtic Sea project is one of the most advanced offshore wind projects in Ireland. The surveys to be conducted by Green Rebel are pursuant to the Foreshore Licence issued to Energia for this project by the Department of Housing, Local Government and Heritage in September 2021.

The surveys, which will be undertaken from April to May this year (subject to weather conditions) will provide important information on the seabed conditions and the ecology of the sea area. Both Energia and Green Rebel have stressed that the survey area will remain open to fishing during the surveys. Energia has a policy of co-existence with fishing interests and said it will continue to engage and work with the fishing industry to deliver a successful outcome for both. The delivery of a successful survey – while ensuring fishing can continue – is the first step in achieving the longer-term co-existence strategy for the project.

The data retrieved by Green Rebel will inform the future development of the project, helping Energia’s experienced offshore team to determine suitable locations within the survey area to locate infrastructure and to determine suitable foundation designs while ensuring minimal impact on wildlife and the environment.

Peter Baillie, Managing Director, Energia Renewables said, “We’re delighted to be making continued progress on the delivery of this ambitious project. The North Celtic Sea project forms part of a multi-billion euro portfolio of investments by Energia as part of the company’s Positive Energy Programme for Ireland, creating jobs and economic benefit for coastal communities, and clean, green electricity on an ongoing basis into the future.

“We’re very pleased to work with Green Rebel as we seek to enable and harness Irish natural resources in wind, to drive the establishment of an indigenous Irish supply chain while underpinning marine based employment. As an indigenous Irish energy company, local partnerships are a key element of enabling the establishment of an Irish offshore wind sector.

“Energia’s offshore wind projects can make a major contribution not just to Ireland’s offshore wind targets but to the decarbonisation of the economy and the requirement to halve our Greenhouse Gas emissions by 2030. This survey is an important component of the overall package of work required to ensure the project remains on the required pathway for 2030 and to engage early with the Marine Area Regulatory Authority (MARA), once it has been established in Q1 2023.

“Energia and our contractor, Green Rebel are committed to working closely together to ensure timely and considered investigation in the North Celtic Sea with maximum sensitivity and respect for the marine environment, for fisheries and for the coastal communities at the core of this project.”

Kieran Ivers, CEO of Green Rebel said, “Green Rebel continues to grow and represents an example of the companies, jobs and investment that Ireland can expect to grow as the local supply chain evolves with the progression of Offshore Renewable Energy along the Irish coastline. We have recently announced an investment of €20 million in technology to meet what we expect to be the future need from developers of offshore wind. Energia Group is a major investor in Ireland’s energy generation infrastructure and we are delighted to work with them on this very significant project. Our partnership with Energia is a clear example of the benefits that can be achieved as Irish companies work together to achieve a brighter and more sustainable future for our island.

As a responsible business with extensive experience of building large scale renewable projects in Ireland, Energia understands the importance of regular communication and consultation with local stakeholders and is committed to this throughout the lifetime of the projects.

Last month, Energia published the Introductory Phase Public Consultation Reports for both of its proposed offshore renewable energy projects; North Celtic Sea and South Irish Sea. Across the two introductory public consultations, there were over 11,700 views of the dedicated project websites and 1,840 visits to the project virtual consultation rooms, culminating in a total of 167 submissions. Energia is committed to ongoing engagement as the North Celtic Sea and South Irish Sea projects progress.

These websites have information about each of Energia’s projects: