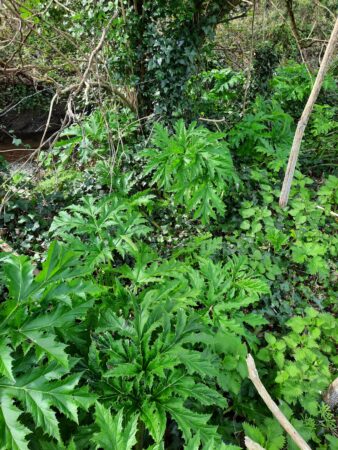 Cork County Council has advanced efforts in controlling an infestation of Giant Hogweed along the River Bride in East Cork. The invasive and toxic plant is a particular problem from Castlelyons to Tallow, where the river enters Waterford.

Giant Hogweed was introduced to Ireland in the 19th Century as an ornamental plant for gardens. However, it quickly colonised and is now classed as a ‘High Impact’ invasive species.

The sap can cause a nasty irritation when it comes into contact with human skin. It can eliminate the skin’s ability to protect itself from sunlight which means that significant blistering can occur when the affected area is exposed to the sun. Giant Hogweeds can grow up to 5 metres tall, outcompeting native plants while its root system can undermine riverbanks leading to erosion and bank destabilisation.

Cork County Council has been working with the BRIDE Farming with Nature team since 2019 to survey, map and address the issue of invasive plants. They formed the Bride Valley Invasive Species Project and have completed the survey and mapping phase. The project is now targeting a 5km stretch of the river from Castlelyons to the Metal Bridge at Ballyrobert.

Mayor of the County of Cork, Cllr Danny Collins said, “Invasive plants can cause significant problems when they take hold and the Giant Hogweed is a particularly nasty species. It thrives in moist, rich soil like riverbanks, growing to huge heights, affecting our native plants and causing erosion. However, it’s the effect that it has on humans that is most concerning. I would like to commend the Bride Valley Invasive Species Project for their work to date and I am hopeful that with the help of local landowners that they will be able to eradicate this toxic plant from the River Bride once and for all.”

The programme involves spraying the Giant Hogweed early in the season when plants are small and the least amount of spray is needed. This reduces the impact upon other plant species in the area.

Enviroco, an ecological company based in Kilkenny, is working on the project on behalf of Cork County Council and is actively communicating with all landowners in the control programme area.

Chief Executive of Cork County Council, Tim Lucey added, “I am delighted to report that all landowners in the area are fully on board with the project. This is vital for it to succeed as any area left untreated will provide a future source of infestation and could jeopardise the success of the project. We are initially focusing on a 5km area however funding has been secured through the National Biodiversity Action Plan for a further three years which will allow us to complete initial spray on all land within 5 metres of the river from Castlelyons to the county boundary. We know that this problem will not be solved in one year and that a follow up programme will need to be carried out by landowners for a number of years depending on the severity of the infestation on their land.”

The Bride Valley Invasive Species Project is funded by the Department of Housing, Local Government and Heritage through the Local Biodiversity Action Plan fund (National Parks and Wildlife Services) and Cork County Council.

The group has produced the “Bride Valley Giant Hogweed Information Leaflet” which includes best practice guidance note for landowners who wish to carry out treatment themselves, either now or in the future. The leaflets can be downloaded from www.thebrideproject.ie or can be picked up at Castlelyons Co-op hardware store.