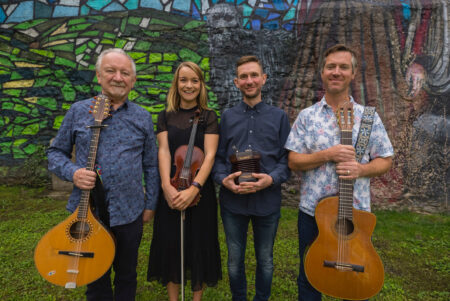 Clare musicians Tara Breen and Pádraig Rynne have been performing regularly together since 2009. Their newest album NASC released in 2021 is a terrific compilation of soul, harmony, and simply beautiful traditional music, magnificently played.

The creative folk musicians are set to play in Cork’s unique live music destination at the Seachurch venue in Ballycotton on the 23rd of July. NASC the album features the four incredibly talented musicians, Tara Breen (fiddle) and Pádraig Rynne (concertina) joined by Jim Murray (guitar) and Dónal Lunny (bouzouki and bodhrán).

Pádraig Rynne, considered one of Ireland’s finest concertina musicians, and one of the most influential folk musicians of his generation, has curated and toured alongside noteworthy projects such as Dán, NOTIFY, and Atlantic Arc Orchestra.

Well known for their creative versatility, the four gifted musicians shape melodies from the new album from both past and present, into something compelling and simply stunning as they will perform a mix of Irish traditional music alongside newly composed tunes.

Nasc, the Irish meaning for ‘link’, is aptly chosen for the connection and soulful music shared between all four traditional performers. The Irish Times have called this ‘Heart-thumping’ album one that is “generous of spirit and wide of open arms, this is an album to savour, often and long” while also considering “The Clare duo’s cut-glass performances and fine tune pairings a joy throughout”.

A limited number of tickets are available to purchase online via the Seachurch website at www.seachurch.ie, for €25. The doors for the live performance will open at 8pm for the 8:30pm show, on the 23rd of July