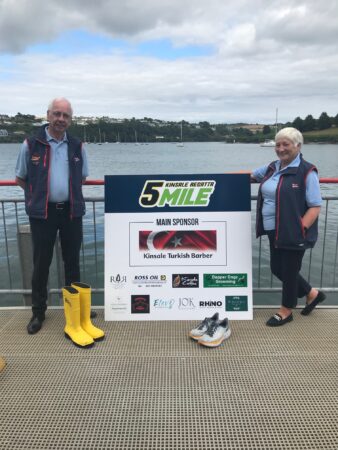 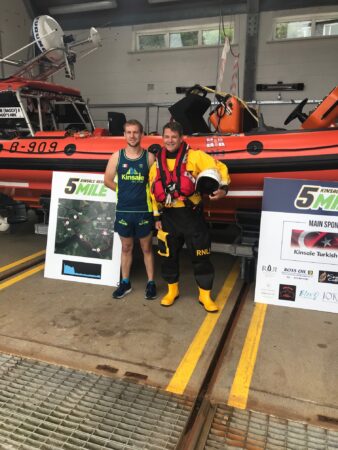 The Kinsale Regatta 5 Mile Road Race takes place tomorrow, Friday evening 29 July as part of the Bank Holiday Kinsale Regatta Festival and a number of lifeboat crew members from Kinsale RNLI will be taking part. It comes ahead of the station’s open day this Sunday, 31 July.

The event is organised and hosted by Kinsale Triathlon Club, in association with Riverstick-Kinsale AC and proceeds raised will be donated to help support Kinsale RNLI and the charity that saves lives at sea.

Crew members Emma McLoughney and Jon Green will be participating in the race along with other crew and fundraisers who will be supporting the event along the way at water stations and outside the RNLI station on the race route close to the finish line.

Jer Callanan, President of Kinsale Tri-Club says: ‘The race starts at the local GAA club and promises to be a fast course, set in the beautiful surroundings of Kinsale, with the finish line right in the centre of town, where there is always a fantastic carnival atmosphere.’

Jon Green, Kinsale RNLI crew member says: ‘Kinsale Tri-Club have always been great supporters of the RNLI and have given generously in support of the station over previous years. Participating in the race, is therefore the least we could do, in terms of supporting the club for the local fundraising they do on our behalf.’

The event is one of the many activities being held as part of the Kinsale Regatta Festival, which runs until the 5 August and promises an action packed weekend of entertainment, culminating in a monster fireworks display this Sunday evening, 31 July at 10.15pm.

Kinsale RNLI will also be hosting their annual Lifeboat Open Day at the Lifeboat Station from 2pm -5pm this Sunday 31 July, where members of the public are encouraged to visit and support the station. This year’s open day will also see the inclusion of other emergency services, refreshments, souvenir shop, rescue demonstrations, meet the crew and Stormy Stan, the RNLI’s mascot.

RNLI volunteer lifeboat crews across Ireland launched 945 times last year, coming to the aid of 1,147 people, 13 of whom were lives saved. That was an average of three people aided each day – rescues which were only possible because of the donations made to the charity by supporters.

Every time an RNLI crew launches, they are determined to save every one. But they can’t do it without the generosity of people. Raising money through the Regatta 5 mile road race is a fun and energetic way to get active and be a lifesaver, because you’ll be raising the vital funds that power the crew. It helps the RNLI recruit and train volunteers and could fund the kit they need to protect themselves. It helps ensure a lifeboat is ready when the call comes, and it helps deliver water safety advice far and wide.