Tickets for Sultans of Ping at Cork Opera House


The Sultans of Ping FC are a Punk band from Cork City in Ireland.

Tickets: €26 standing & €30 seated + booking fees on sale 10am on Weds 18th August at www.corkoperahouse.ie or www.ticketmaster.ie

After selling out within 48 hours when tickets first went on sale in May 2022 Cork’s beloved sons The Sultans of Ping listened to their fans and today announced an extra night for their 30th Anniversary performance in Cork Opera House in February 2023.

Already sold out on Saturday, February 11, 2023 Sultans of Ping have added a new date on Friday, February 10, 2023 in Cork Opera House with tickets going on sale this Wednesday, August 17, at 10am. Each night will feature different special guests making each show a unique one-off experience.

Formed in Cork in 1988 by Niall O’Flaherty, Pat O’Connell, Paul Fennelly and Ger Lyons, The Sultans of Ping came to the attention of the Irish and UK music press, when ‘Where’s Me Jumper’ a wonderfully absurd slice of guitar driven indie-pop, crashed into the charts in 1992

A series of brilliant singles followed supported by the band’s riotous live show, memorable dress sense and an intelligent, coverage-friendly wit which saw the band sign to Epic Records and release their irresistible and iconic debut album, Casual Sex In The Cineplex.

The Sultans of Ping’s star burned brightly for several years, releasing subsequent albums Teenage Drug (including the classic ‘Michiko’) and Good Year for Trouble, whose artwork caused problems, as major record chains like HMV and Virgin decided that the display of bondage and S&M was too explicit.

The band went their separate ways having left an indelible mark on Irish and UK indie, and reformed as The Sultans of Ping in 2005, playing a number of gigs with Carter the Unstoppable Sex Machine. In 2006, the band released their live DVD U Talk 2 Much: Live At The Cork Savoy Theatre on Cherry Red Records.

Speaking on the upcoming shows in Cork Opera House drummer Morty McCarthy says “Its our first time playing in Cork since 2014 and we are really excited to be playing Cork Opera House for the first time in the band’s history.” The Sultans of Ping will be celebrating 30 years since the release of Casual Sex In The Cineplex and fans can expect tracks from their debut such as ‘You Talk Too Much’, ‘Stupid Kid’ and the timeless ‘Veronica’. 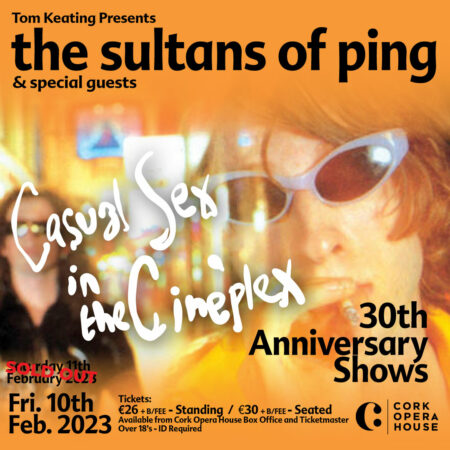